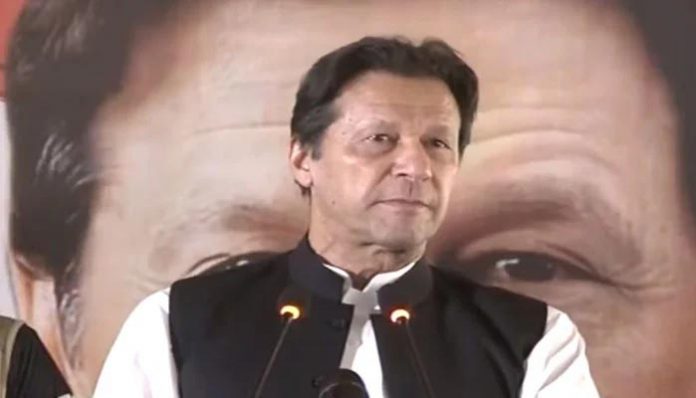 ISLAMABAD: PTI Chairman Imran Khan warned on Wednesday that the justice system in the country was under threat because of the new government in power. Speaking during the executive council meeting of the PTI’s Rawalpindi chapter in Islamabad, the former prime minister said that his successor — Prime Minister Shehbaz Sharif — siphoned off Rs16 billion under his servant’s name and alleged that whenever the investigation agencies started questioning any of those servants, they somehow died. The PTI chairman said that a country is run on the basis of strong institutions where justice and law are supreme. However, he added that with the arrival of the incumbent government, the rule of law has ended as there is a different law for the rich and a different one for the poor. “There is no justice in the country; employees of the National Accountability Bureau (NAB) are afraid, so only the judiciary can salvage the situation,” said Khan. The PTI chairman, while calling the incumbent government a “blackmailing mafia”, claimed that people were fearful that they would be “threatened if they take action against the rulers”. “This is the biggest problem in the country and the justice system of the country is under threat. Those who are supposed to catch the thieves are saving themselves,” said Khan.  The PTI leader also claimed that journalists and media houses were being threatened, adding that eight first information reports (FIRs) have been registered against him.  Talking about the party’s “Azadi march”, the PTI chairman claimed that the policemen who had attacked his supporters were acting against their conscience.  He also questioned why his supporters were attacked for carrying out a “peaceful protest”.  “There were peaceful citizens in the long march not terrorists. It is the citizens’ right to protest in a democracy,” said the PTI leader. He also claimed that law enforcement agencies had thrown off PTI workers from the Ravi Bridge. “Their legs started shaking after seeing the sea of people in the long march,” claimed the PTI chairman. Commenting on the country’s economic situation, the PTI leader warned that Pakistan was on course to turn into a Sri Lanka, adding that the incumbent leaders had devised policies to cause more inflation than the PTI government during its 3.5-year term. “Petrol and electricity are missing, while the rupee is falling. The country was progressing rapidly but these thieves conspired against us,” said the PTI leader.  He also warned the masses that the incumbent government was planning to increase the power tariff further.