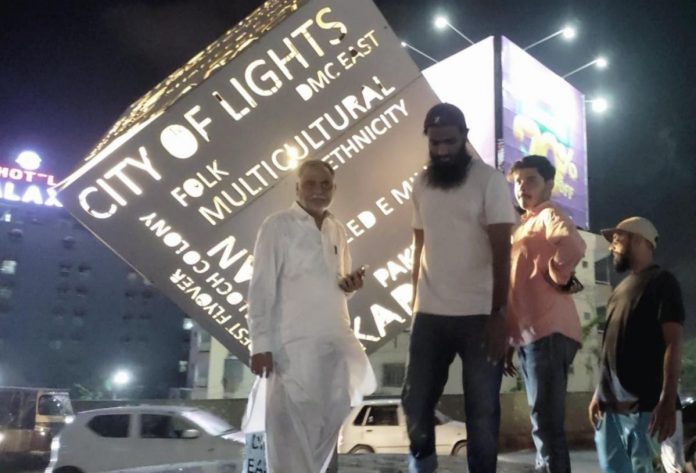 Karachi: (www.thenewslark.com) (By:TNL Reporter)Administrator DMC East Rahmatullah Sheikh has said that DMC East is playing its role in restoring Karachi to the city of lights.At first Char minar roundabout Bahadurabad, were beautified which was much appreciated. Now a Brightened monument has been installed on the Balouch Colony flyover which has become a public focus.
He expressed these views while inspecting the monument to installed on the Balouch Colony flyover along with executive engineer M&E Imtiaz Bhutto, Director Parks Agha Sameer, Zafar Iqbal.
He said that a large number of work is being done to beautify parks, green belts and roundabouts, steps are being also taken by the park department to promote greenery, co-operation of other institutions in planting to reduce environmental pollution will also be carried out for betterment of atmosphere.He directed the officers to complete the ongoing development works at parks, green belts roundabouts at the earliest.
Speaking on the occasion, Director Parks Jamshed Zone Zafar Iqbal gave a detailed briefing to Administrator DMC East on the ongoing works under the management of the Parks Department in Jamshed Zone.