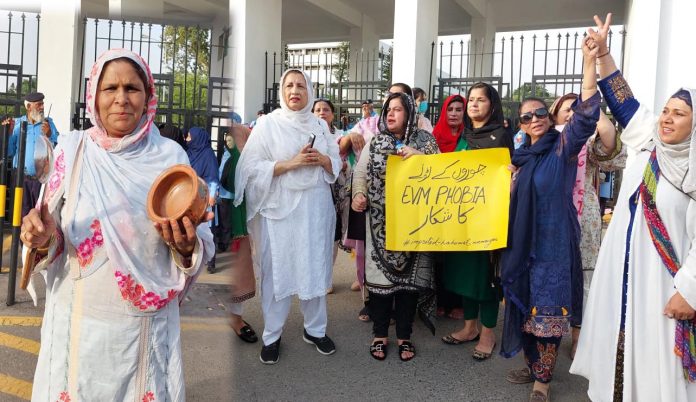 ISLAMABAD: The female parliamentarians belonging to the PTI Thursday staged a protest outside the Parliament House. The protest was led by the party’s leaders Aliya Hamza, Kanwal Shauzab, and Maleeka Bokhari. The protesters tried to enter the Parliament House building by climbing onto the gates to record their protest. They chanted slogans of “imported hukoomat namanzoor” (foreign government unaccepted) against the rising inflation in the country as well as the bills passed by the Parliament during a joint session. Some of the protesters also carried utensils to the site of the demonstration. In a bid to ward off any untoward incident, police personnel also reached the site of the protest.  Hamza said that the party members had come to protest peacefully against the incumbent government, however, the police tried to stop them and even pushed the protesters. “The speaker of the National Assembly has accepted our resignations. Our voices cannot be suppressed,” she added. On the other hand, parliamentarian Shauzab said that the rights of people were being “snatched away” as the electronic voting machines (EVMs) were being abolished. She alleged that the protesters were baton-charged by the police. Meanwhile, the Parliament’s joint session has passed the Elections (Amendment) Bill, 2022, and National Accountability (Amendment) Bill, 2022. Last month, the National Assembly passed bills to abolish the PTI government’s electoral reforms giving overseas Pakistanis the right to vote through i-Voting and electronic voting machines (EVMs). Some bills related to the laws of the National Accountability NAB were also passed.  Earlier this month, President Arif Alvi had refused to sign the bills, after which the coalition government had decided to call a joint session for the passage of the bills.