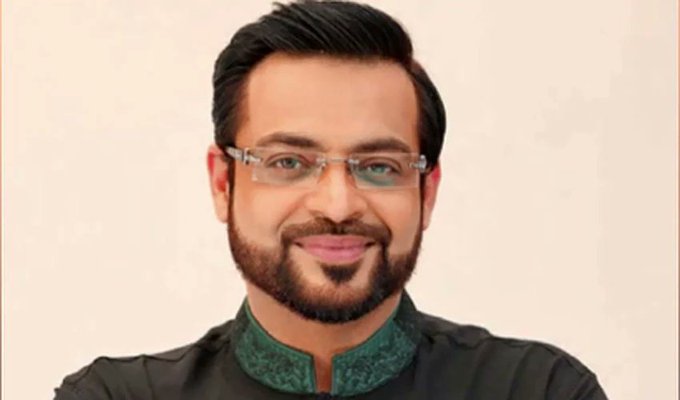 KARACHI : Member of National Assembly (MNA) and famous television host Aamir Liaquat Hussain has passed away in Karachi, officials confirmed Thursday afternoon. As per his domestic staff, Aamir Liaquat was not feeling well since morning and later became unconscious. He was taken to a private hospital where he was pronounced dead upon arrival, he added. However, spokesperson of Chippa, a welfare organization, stated that the lawmaker was found dead at his house. Meanwhile, the police have started an investigation into the death of the lawmaker. The authorities have decided to conduct a post-mortem as he died under mysterious circumstances. National Assembly Speaker Raja Pervaiz Ashraf adjourned the session, which started earlier today, till 5pm on Friday after receiving news of the MNA’s death. Aamir Liaquat was born 5 July 1971 in Karachi. Hussain was a politician, television host and has been listed three times in The 500 influential Muslims worldwide. He was a member of the National Assembly from 2002 to 2007 and served as the Minister of State for Religious Affairs from 2004 to 2007 in the federal cabinet of Prime Minister Shaukat Aziz. Hussain later joined Pakistan Tehreek-e-Insaf (PTI) in March 2018 and was re-elected to the lower house of the parliament as a PTI candidate for constituency NA-245 in the 2018 general election. The TV host had solemnized three marriages, which all ended up in separation. After his third wife, Dania Shah, filed for divorce, Aamir had decided to “leave Pakistan forever” following some alleged videos were posted online and went viral. Arif Alvi,Shehbaz Sharif,  Murad Ali Shah, Asif Ali Zardari, PPP Chairperson and Foreign Minister Bilawal Bhutto-Zardari, former Interior Minister Shiekh Rashid and former Sindh governor Imran Ismail expressed sorrow over the demise of the former lawmaker and prayed for his soul.