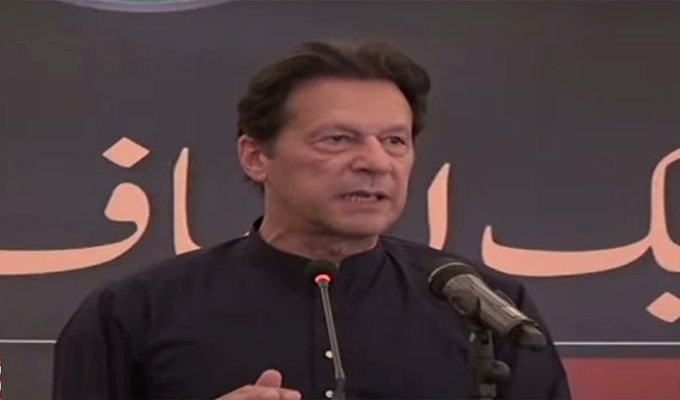 ISLAMABAD: PTI Chairman Imran Khan on Wednesday vehemently criticised the government and said the incumbent rulers would “not do anything without the approval of the United States”.Khan was addressing party workers and leaders at the PTI’s National Council Meeting after he was re-elected as the chairman unopposed as other candidates had withdrawn in his favour. PTI leaders Umar Sarfaraz Cheema and Naik Muhammad were the other two contenders who were running for chairman. Moreover, Shah Mahmood Qureshi and Asad Umar have also been re-elected as the vice-chairman and the secretary-general of the party, respectively. The PTI chairman said they will “not take a stand for the nation” as they have billions of dollars stored in foreign bank accounts, which they will protect at any cost. “They are afraid that if America is disgruntled with them, then they will suffer the same fate as the Russian oligarchs,” the PTI chairman said, claiming that from 2008 to 2018, the United States carried out 400 drone attacks on Pakistan, a number that had been unprecedented. Khan said the leaders of that era — ex-president Asif Ali Zardari and former prime minister Nawaz Sharif — did not “utter a word in protest” when the drone attacks were taking place in Pakistan despite Islamabad being an ally of Washington. Khan criticised the government for launching a crackdown on PTI workers and said that he had never imagined that such actions would be taken in Pakistan against the workers of a political party. He added that when PTI was in power, JUI-F chief Fazlur Rehman and PPP Chairman Bilawal Bhutto-Zardari marched to Islamabad, but the then-government did not stop them. The PTI chairman reiterated that “corrupt rulers” were imposed on Pakistanis through a “conspiracy” and to back his claim, he said that since the ouster of his government, people have taken to the streets — a move that has been “unprecedented” in the country’s history.  Moving on, Khan said “no one” has confidence in the current leadership of the Election Commission of Pakistan (ECP), while the government was also trying to appoint a person of their choice as the new chief of the National Accountability Bureau (NAB). Explaining his reason for not having confidence in the ECP, Khan said that preparations were underway to ensure that present rulers win the next general elections. “They are gerrymandering the constituencies.” Khan said the country’s economic situation was witnessing turmoil because of the politicians who ruled the country for the last 30 years. “The economy is deteriorating at a fast rate […] therefore, accused cannot be judges,” he said while chiding the rulers. “Who is benefitting from the situation that has prevailed in the country? The enemy wants to weaken the Pakistan Army,” he maintained.