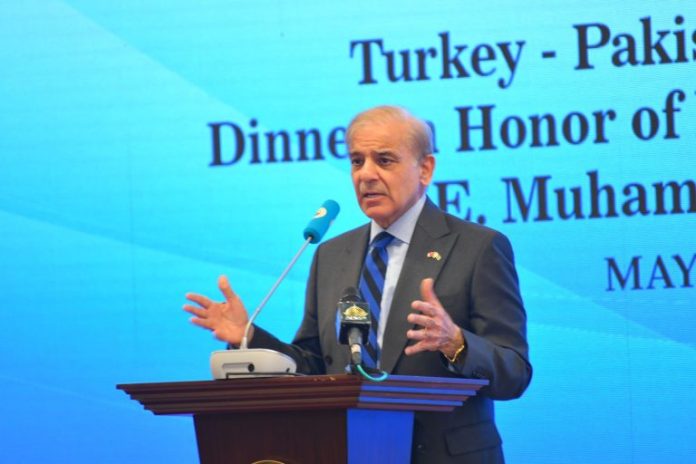 ISLAMABAD: Prime Minister Shehbaz Sharif Tuesday addressed a day-long pre-budget business conference in the federal capital and said that the country’s economy cannot be streamlined without political stability.  The conference was being held to explore avenues for consensus-based economic measures with all stakeholders on board. It brought together leaders from a wide range of industries on a single platform for a vibrant and interactive debate, in line with the prime minister’s vision of the Charter of Economy and an inclusive economic policy-making approach.  The prime minister said since Pakistan’s inception 75 years back, the economic development in the initial 25 years and the economic development after that have a “stark” difference. PM Shehbaz said Pakistan’s five-year development programmes were made by top-tier professionals, which allowed the country to progress and Islamabad was way ahead of other nations in the region. “In the 1990s, the Pakistani rupee had better value than the Indian rupee. Pakistan also showed (India) how can we run the economy on modern lines; we liberalised Pakistan’s economy and India copied it,” he said. PM Shehbaz added there were suggestions put forth by the conference’s participants, but “we should not limit ourselves to proposals and move ahead and implement them.” “But it is important to note that without political stability, there can be no economic stability, and vice versa,” he said, stressing the need for a “Charter of Economy”, which would lead to long-term stability. “No matter what happens, whichever party comes into power, the goals set in the ‘Charter of Economy’ will remain unchanged. It will become our sacred trust, which will not change,” the prime minister said, adding: “We need this.”Moving on, the prime minister said there was a need to develop rural areas as when people travel from underdeveloped to developed cities, they become a burden on the resources of that place.