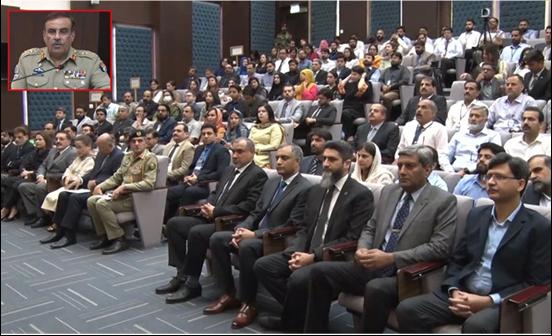 ISLAMABAD: Chairman Joint Chiefs of Staff Committee (CJCSC) General Nadeem Raza Monday stressed avoiding baseless and unnecessary comments on Pakistan’s nuclear programme. “Pakistan is a responsible and confident nuclear country,” the deputy chairman of the National Command Authority said during a seminar at the National University of Sciences & Technology (NUST) in the federal capital. Pakistan’s policy is full-spectrum deterrence which is within the scope of reliable nuclear balance, the top military official said, noting that the country’s safety mechanism was in line with national and international standards. Asking people to refrain from commenting on Pakistan’s nuclear programme, the CJCSC said: “In nuclear countries, only the National Command Authority has the right to comment on strategic programmes.” Pakistan’s nuclear capability guarantees the defence of the homeland as well as its integrity; it also has the complete support of the political parties and the masses, he noted. Civil and military leadership stands like an iron wall with the country’s strategic programme, General Raza said, adding: “National security is indivisible.” “Pakistan will not compromise on its nuclear programme.” The top military official’s comments came after PTI Chairman Imran Khan said that if the establishment does not “take the right decision” then Pakistan would break into “three parts”.The former premier warned that once the country is destroyed., it will default, and the international world will ask Pakistan to move towards denuclearisation — as Ukraine did in the 1990s.