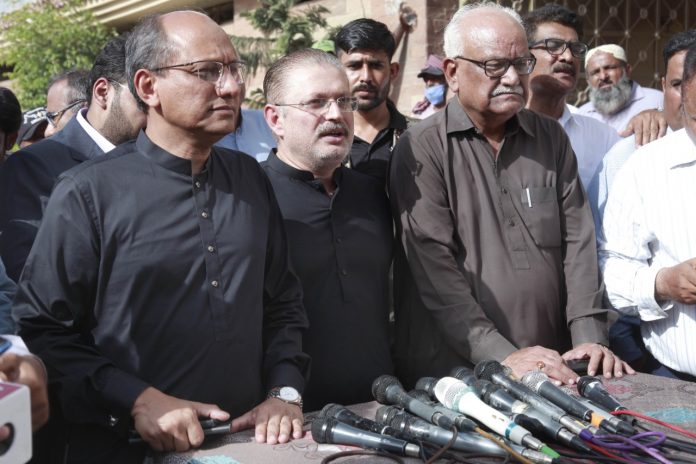 Karachi: (www.thenewslark.com) (By:TNL Reporter) The test run of modern buses of Sindh People’s Intra District Bus Service was conducted today. Provincial Minister for Information Transport and Mass Transit Sharjeel Inam Memon led the trial of buses from Model Colony to Awari Tower. He was accompanied by Provincial Labor Minister Saeed Ghani, Sindh Chief Minister’s Special Assistant Waqar Mehdi and others. Talking to media on the occasion, Sharjeel Memon said that the promise made by PPP Sindh government to the citizens of Karachi is going to be fulfilled soon, as test run has started. He added that 240 buses under Sindh People’s Intra District Bus Service will ply on seven routes of Karachi city  and 10 buses in Larkana city. He said the buses would be run and maintained by National Radio Transmission Company (NRTC) for 12 years. He said that Inshallah, People’s Intra District Bus Service will  start it’s formal operations in  current month in Karachi and Larkana. Sharjeel Inam Memon said that Abdul Sattar Edhi BRT Orange Line buses have also reached the depot. The Orange Line will also be launched soon. This is the commitment of Pakistan People’s Party’s leadership and  Chairman Bilawal Bhutto Zardari and Party leadership  had given us a special task to complete Mass Transit projects in the city, he added and said that the credit for these buses also goes to Sindh Chief Minister Syed Murad Ali Shah and former Transport Minister Syed Owais Qadir Shah. He said that network of mass transit has been planned for Karachi city.  He said that the network of such excellent transport system will be spread all over Sindh including Karachi.  The Provincial Minister said that the transport department was working day and night on the directions of Sindh government and  holding meetings on mass transit projects even on holidays so that these projects could be completed as soon as possible. He said that Sindh government has absolute commitment to provide basic facilities of public transport to the people and it would be visible to everyone in coming months.  He said that it was late but it is a commitment that PPP Sindh government is present in the field and is working on it. The first priority of the Sindh government is to provide transport facilities to the people of Karachi, he added and said that is a gift for the karachities which  is their right .Provincial Minister further said that  the number of Buses  will be enhanced and the buses continue to arrive in different phases. He said that they were making all out efforts  to provide a modern commuting facility to the people of Karachi in the current tenure of government.  He said that the track of People’s Bus Service is being improved where it is needed and the Minister for Local Government and KMC are cooperating fully and their teams are present on the ground  as these  big passenger buses required clear tracks.   The Sindh government has instructed that there should not be any delay in it . insha Allah  citizens will see these buses moving smoothly on roads soon, he concluded.