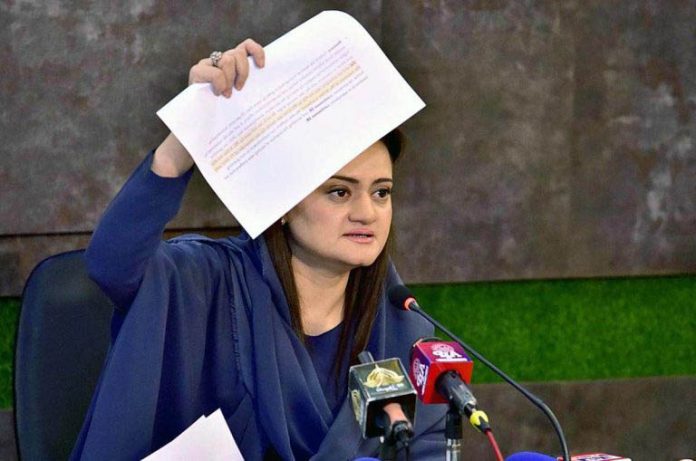 ISLAMABAD: Minister for Information and Broadcasting Marriyum Aurangzeb on Friday said the government was giving Rs 2,000 monthly subsidy to all the citizens earning less than Rs 40,000 so that they could absorb the inflationary pressure after the increase in petroleum products’ prices.“Anybody whose monthly salary is less than Rs 40,000 is getting, Rs 2,000 from the government. Whether, it is labourer, farmer, teacher, vendor, working women or the student who do part time work to bear expenses of his/her education, all are being given the subsidy,” she told a news conference.

Marriyum asked the eligible persons to make a call on 786 to get the relief. “Rs 2000 is being given in a transparent manner after checking the income-level of the caller, who seeks the subsidy.”

The minister said the relief package was announced prior to the decision taken by the government for increasing the prices of petroleum products. “It was easy for us to raise the prices on the very first day of our government, but it were Shehbaz Sharif and Nawaz Sharif who stressed on giving a relief package to the people before the increase.”

It was the Pakistan Tehreek-e-Insaf (PTI) government which used to increase the POL prices after every 15 days in the dark of night, she added.

Marriyum said the subsidy would also be given to all those who were already getting monthly stipend under the Benazir Income Support Programme.

“This is called the relief,” she said while reprimanding those who were criticizing the government which had only one vision of resolving the issues faced by the people due to the PTI’s four years rule marred with incompetence and corruption.

“We have done this before and set the example by doing it again. We do not raise mere slogans and lecture others as it is the PTI which had given the gifts of inflation, massive unemployment and economic woes to the people,” she observed.

The minister said the people had given PTI chief Imran Khan a chance to bring development and prosperity in the country, but his only focus was on filling the pockets of mafias and cartels patronized by him.

She ruled out Imran Khan’s return to the power in his entire life due to steep decline in his popularity among the people, who had rejected him for his incompetency, negative politics, corruption, loot and plunder.

“Imran is best at doing dirty politics atop the container, spreading lies, treachery and above all in giving Islamic touch to all this,” she said while lashing out at the PTI chairman for equating his departure from Islamabad during the long march with the “Treaty of Hudaybiyah”.

She said Imran was doing nothing but the politics based on lies, deception and hypocrisy. On the contrary, she added, “we have the vision and capability, and we will chart the country on the path of progress and prosperity.”

The coalition government would break the vicious cycle of inflation, and its visionary leadership would steer the country out of all the crises, she remarked.

Marriyum said Imran Khan, despite being into the power for four years, had nothing to highlight his performance. His “cheap politics and narrative” had destroyed the country, increased poverty and rendered thousands of youth unemployed, she added.

The minister said it was the current government, which was striving to save the people from the inflationary impact caused by the bad governance and wrong policies of the PTI government.

“It was easy for us to hand over the government to the caretaker setup by leaving the country into crisis. We can easily take the decision for our own political gains, but we demonstrated a responsible attitude only for the sake of country’s stability and progress,” she maintained.

Marriyum said the country was witnessing power load-shedding of 18 hours every day in 2013, but it was the Pakistan Muslim League-Nawaz (PML-N) government, which had almost brought it to zero.

The minister flayed that the PTI’s “rented spokespersons” were criticizing the government’s agreement with the International Monetary Fund (IMF). “These spokespersons have no right to lecture us on the economy as they were removed by their own Prime Minister Imran Khan from the ministries over bad performance.”

“When the economy collapsed and market confidence waned, they negotiated with the IMF on weak grounds,” she said, recalling that then finance minister transferred the then finance secretary for pointing out the tough conditions agreed by them.

Former finance secretary Yonus Dagha was forced to get retired from his services as he called for seeking the Parliament’s approval before signing of the agreement with the IMF, she said, adding Imran Khan used the “back door” to get the deal signed.

“Today we have to implement that agreement (signed by the PTI government with the IMF). We know that increasing the price of petrol will affect our politics, but we have taken this decision with a heavy heart and in the national interest,” she remarked.

She chided Imran Khan for playing the poems imbibed with national emotions, in his public gatherings. “Does he really know the meaning of poems like ‘Hum Dakhy Gay’ (We will see) and ‘Jaag Utha Ha Sara Watan’ (The entire homeland has got awakened). He should be ashamed of himself for doing all this,” she added.

She said Imran Khan got exposed when he violated the agreement signed by his government with the IMF by announcing the subsidy on the POL prices and that too when he sensed his defeat in the no-trust motion moved by the then opposition in the National Assembly.

Now the entire nation, she added, was awake after becoming aware of Imran’s incompetency, corruption, loot, plunder, chaos and anarchy, and he could no more befool them.

Marriyum also rejected the claim of PTI’s Khbyer Pakhtunkhwa government about rise in the flour prices, saying the Federal Government had offered to buy 200,000 tonnes for the former so that the rate could be declined in the province. Under the 18th Amendment, the provinces themselves fixed the flour prices and it was the PTI government, which had been ruling the KP for the last eight years.

The minister said the country now had a prime minister who did not get to know the increase in prices of essential commodities by watching television channels, rather he himself monitored the situation on ground.

She said the Imran-led government had angered the foreign investors by filing cases against them in the country, just to benefit his friends in the cartels and mafias. Prime
Minister Shehbaz Sharif had restored the confidence of investors in his visit to Türkey where he was told as to how Imran Khan’s government persecuted them.

Marriyum said she would hold a detailed news conference on the issue of foreign investors on Saturday to expose Imran’s hostilities towards them.

She said there would be a conference on Tuesday at the Prime Minister’s Office wherein all the business stakeholders would be invited for finalizing the charter of economy. The process of inclusion of all political parties was also underway, she added.

Red lines would be drawn in the charter of economy and no government would be able to cross those lines whatsoever, she said.