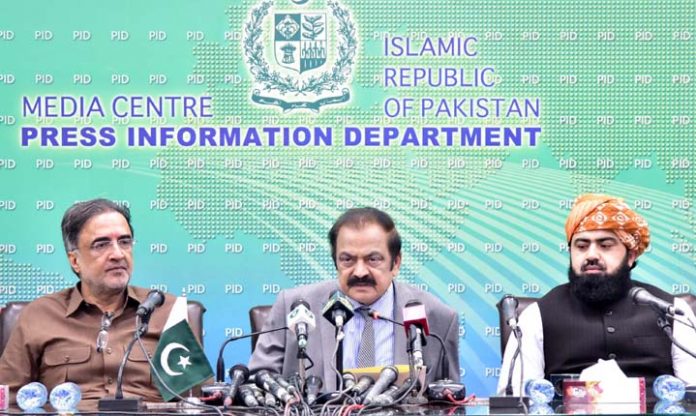 ISLAMABAD: Minister for Interior Rana Sanaullah Tuesday said the PTI’s long march was not a political activity rather a criminal activity to besiege the Federal Capital rendering the government dysfunctional. As the Pakistan Tehreek-e-Insaf (PTI) had no political narrative, it had nothing to do with democratic norms, he said and added that the government would present evidence in that regard at relevant forums. Besieging the Capital was surely a criminal activity, punishable under the Penal Code, he said while briefing the media, along with Minister for Communications Maulana Asad Mahmood and Prime Minister’s Advisor Qamar Zaman Kaira about the decisions taken in the Federal Cabinet meeting chaired by Prime Minister Shehbaz Sharif. Rana Sana said the cabinet thanked the people, especially the residents of twin cities of Rawalpindi and Islamabad, for not responding to the PTI’s long march which was aimed at creating chaos in the country. The minister claimed that PTI Chairman Imran Khan had misused the resources of Khyber Pakhtunkhwa government, besides forcing the government employees and police personnel to take part in their march for “attacking the Federation”.He alleged that the PTI had the “criminal agenda” of dividing and misleading the nation to fulfill its nefarious designs.A few thousands armed people, he claimed, either accompanied Imran’s procession from KP or came from Mianwali to Islamabad. Wherever they were stopped, they resorted to firing on the police and security agencies, he added.Rana Sana said the PTI leaders had directed their party workers to directly go to D Chowk, instead of stopping at H 9 as directed by the Supreme Court. Some 3,000 to 4,000 criminals were sent to Islamabad as an advance party, who were accommodated at the KP house Parliament Lodges and some private residences, he claimed.