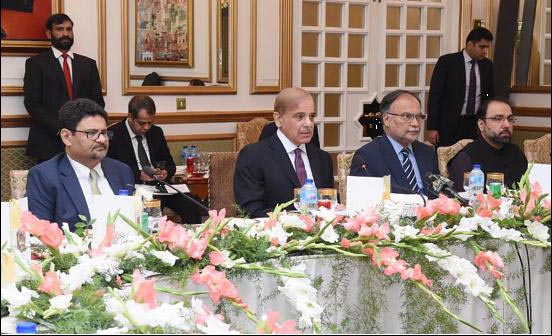 ISLAMABAD: Pakistan doesn’t want handouts, but investments from its Chinese friends, says Prime Minister Shehbaz Sharif. The premier said that the friendship between Pakistan and China’s unwavering friendship has weathered storms and strengthened over time. He praised China for progressing in various sectors and lifting numerous above the poverty level during the last three decades. Pakistan has China as a model to emulate and replicate its development reforms, PM Shehbaz Sharif said during a meeting with the representatives of Chinese companies investing in Pakistan on Monday. The premier said that Pakistan looks forward to seek support from China in every walk of life and it will benefit from China’s experience in the fields of industries and agriculture. Pakistan has resolved that we will meet all the challenges however difficult they are and take Pakistan towards progress, the premier said. “For this, Pakistan needs real support from our Chinese friends, not in terms of money, aid or handouts, but in terms of investment, trade and expertise.” PM Shehbaz Sharif said that China is the most reliable friend of Pakistan. He thanked the Chinese leadership, and his Chinese counterpart, Xi Jinping, for their unstinting support towards Pakistan in the shape of the China-Pakistan Economic Corridor.He said that CPEC has helped Pakistan move forward a huge way. Recalling the start of the last decade, when electricity load-shedding was at its peak, PM Shehbaz Sharif said that the Chinese president and then prime minister of Pakistan Nawaz Sharif made various deals to set up power plants to overcome the issue by 2017. The premier pledged to fully facilitate the Chinese investors in Pakistan and never to forget China’s cooperation.