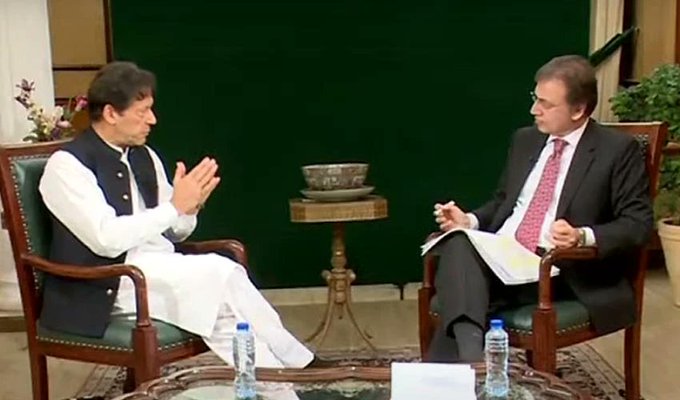 PESHAWAR: PTI Chairman and former prime minister Imran Khan Monday said that all previous governments in Pakistan were removed because of corruption with the exception of the PTI-led one. Speaking during a lawyers’ convention in Peshawar, Khyber Pakhtunkhwa, Khan said: “Since our government was not removed due to corruption, people took to the streets instead of distributing sweets.” He said that the current political milieu of the country was posing a real challenge for the judiciary as well as the lawyers in the country. “I, therefore, want the lawyer’s community to support me as they and the judiciary as a whole play an important role in saving the country,” he said. During the speech, Khan once again criticised the incumbent government and blamed it for conspiring with the United States to oust him. The PTI chairman then went on to explain how US Assistant Secretary of State for South and Central Asia Donald Lu threatened the Pakistani ambassador to the US and detailed how, according to him, the PTI-led government was removed from power by the then opposition. “They [the then opposition] comprised bootlickers, that’s why the US wanted to bring them back to power.” Praising this government’s performance, the ex-PM claimed that Pakistan performed better in the last two years in the economic sector as compared to the past. “The country grew economically by 5.6% in 2021 and 6% in 2022,” said Khan, adding that the country achieved record tax collection targets during his tenure. “India — which is a Quadrilateral Security Dialogue (QUAD) country — bought oil from Russia at lower prices and has reduced the petroleum prices in its country while our government increased the prices.” Khan said that Pakistan has been ruled by the military but two political families — Sharifs and Zardaris — monopolised the political area and remained in power for the last 62 years. “I ruled for three-and-a-half years and they started having issues with my government just because Pakistan wanted to maintain cordial relations with other countries but refused to fight their wars,” he said.  He then criticised the former government for allowing the United States to allow drone attacks in Pakistan.  “We had no relation will 9/11. I will not give Pakistan’s bases to America,” said the former PM, adding that Pakistan neither wanted bad relations with any country nor did it want to become their slave. Talking about the Masjid-e-Nabawi (PBUH) incident, Khan said that the current government was “cursed by Allah to the point that people, even when they were present at a holy place, couldn’t stop themselves from chanting slogans against these corrupt leaders.” “What was our [PTI’s] fault if ordinary people chanted slogans against these people in Madinah?” the former premier questioned. Khan lambasted the PML-N and said that the Supreme Court had rightly called the Sharif family a “Sicilian Mafia”.”I have never seen anyone more filthy than this family.