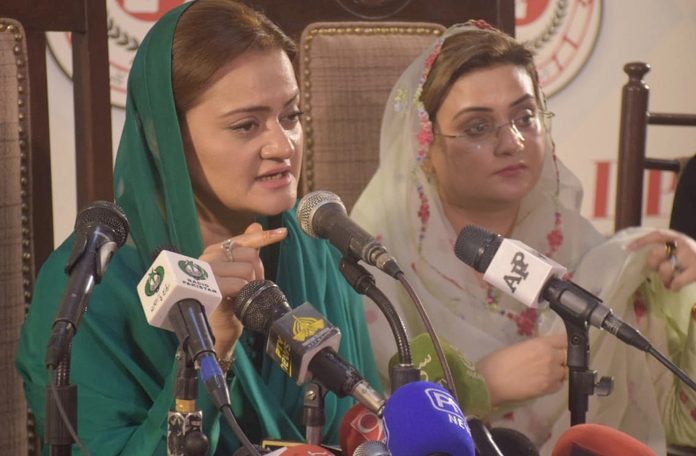 ISLAMABAD: Minister for Information and Broadcasting Marriyum Aurangzeb on Saturday ruled out any NRO-like concession for PTI Chairman Imran Khan over misuse of authority during his four-year rule, which was marred by corruption, nepotism, loot and plunder. “Imran Khan Sahib, you will not get an NRO [National Reconciliation Ordinance] today,” she said while rejecting his negotiation offer based on dictations and threats to the government. Addressing a news conference, the minister said talks with Imran Khan would be meaningless until he changed his attitude and abstained from using abusive language. “Imran Khan stated that he would hold dialogue if the date of fresh election were given in June. I am giving you the date of election today, i.e., of August 2023,” she said, asking the Pakistan Tehreek-e-Inasf (PTI) chief to keep “that date” in his mind. Marriyum reiterated that the election date would be announced by the Pakistan Muslim League-Nawaz and its allies after the completion of their government’s constitutional term. “Nobody will be influenced by your dictations, threats, bullying and abuses,” she said, asking Imran Khan to wait for a date in 2023 when the general election would be held in the country. “Stay at home if you want the dialogue on this issue [general election], and if you come out with arms, bullets, batons and announcement of a bloody march then there will be consequences…,” she observed. The minister urged the PTI Chairman to abstain from further polarizing the society. and creating unrest, chaos and anarchy. However, “being in a critical mental condition, he should better stay at his Bani Gala residence and take rest by taking a tranquilizer, and let the government serve the people, who want peace, development, progress, end of corruption, jobs and relief from the inflation left by his (Imran’s) government at the highest level,” she remarked. “I also advise him to refrain from appearing on the TV screens in such a mental condition,” Marriyum said. He should better introspect as to why he had failed to deliver in the last four years when he had all the power and government offices at his disposal through which maximum relief could have been given to the masses. Now his mourning of the bad performance would not make any difference as the people had rejected him and his politics of unrest, vandalism and arson, she added. The minister asked Imran as to why he wanted to come into the power again after failing to fulfill all the promises he had made with the people, including ten million jobs, end of corruption, and transformation of the country into a Madina like state. “Why do the people trust him again when he could not construct a road and build hospitals, schools and universities while in power?” she questioned. Reacting to Imran’s statement of returning to the power with a two-third majority, the minister said the people would never give incompetent, corrupt, cartels and mafias the responsibility of running the state affairs again.