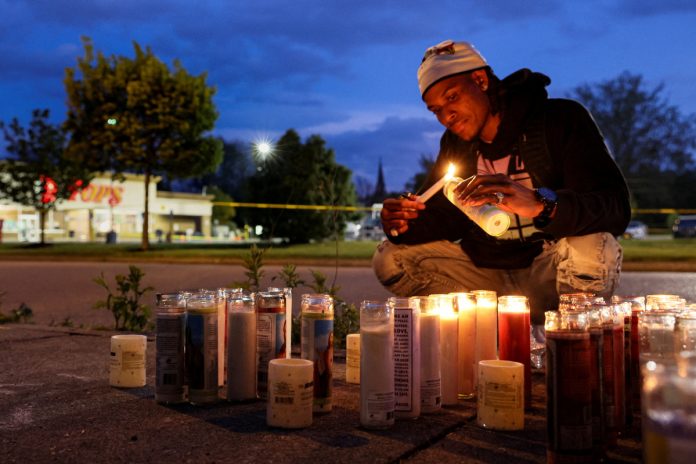 Gun violence brought another tragedy to the U.S. on May 14. An 18-year-old white man opened fire at a supermarket in Buffalo, New York, killing 10 people and injuring three others, most of whom were African Americans.

The police called the shooting a “case of racially motivated violent extremism.” The Washington Post also said it was “the deadliest of 2022,” and also “the latest massacre in recent years carried out by perpetrators allegedly driven by hate and racism.”

Gun violence is an “epidemic” of the American society. According to statistics released by non-profit organization Gun Violence Archive on its website, the number of deaths from firearms in the U.S. increased to 43,643 in 2020 from 39,558 in 2019, and the number further rose to 45,005 the last year. As of May 16, 16,058 people had lost their lives in gun-related violence this year.

A report by the Giffords Law Center to Prevent Gun Violence indicated that nearly every American will know at least one victim of gun violence in their lifetime. It said Americans of all ages worry about mass shootings when they go to concerts, movies or churches. It has become a common memory of Americans that screaming children dodge bullets under tables in active shooter drills at school.

What makes mass shootings so frequent in the U.S. is the deep-rooted gun culture of the American society. Americans make up 4.2 percent of the world’s population but own 46 percent of the entire global stock of civilian firearms, or 393 million guns. In other words, there are 120 guns for every 100 U.S. residents.

Such a gun culture has been deeply rooted because of the advocacy by pro-gun interest groups. It’s so absurd that the National Rifle Association (NFA) of the U.S., the most solid fortress for American pro-gun groups, said the best way to prevent gun violence is to distribute guns to more good people. “Automobiles kill people, too, and why don’t we ban them?” That’s a ridiculous question always asked by the organization.

Adam Winkler, a professor of law at the University of California, Los Angeles pointed out that gun rights and gun-control legislation are not contradictory to each other. He believes the real problem is that the pro-gun groups are always propagating extreme gun culture and killing the possibility of gun-control legislation with their strong lobbying capabilities.

According to The Washington Post, the Republicans once considered advancing gun-control legislation in cooperation with the Democrats after mass shootings took place in the country in 2019. However, the plan was aborted after the NFA made a dozen phone calls to the White House, which made the Republicans worry that gun-control legislation might affect its approval rating.

The incumbent administration is also offering much cry and little wool. Nothing changed until it released a regulation to track “ghost guns” this April. However, the regulation was criticized by the Republicans, and some pro-gun organizations have even decided to file lawsuits against it.

When politicians and interest groups are tied together by money politics, and politicians are attacking and impeding each other, the U.S. citizens are paying the price with their lives.

The “incurable” epidemic of gun violence in the U.S. mirrors the country’s failure in governance. A U.S. media outlet said that evolving from simple public safety cases to extreme cases motivated by hate crimes, racism and wealth gap, the mass shootings in the U.S. profoundly reflect the governance challenges the country is facing.

Thomas Abt, a senior research fellow at the Harvard Kennedy School, found that more than a quarter of gun homicides in the U.S. happened in neighborhoods that house just 1.5 percent of the U.S. population and are bothered by extreme poverty, lack of education and severe racial discrimination.

The right to life is the primary human right. However, the so-called illusion of the U.S. that life, liberty and the pursuit of happiness are inalienable rights all men are endowed with has been shattered again and again by gunshots. We need to have deep reflection on the American-style human rights.

When even the loss of innocent lives fails to promote gun control in the country, the world has every reason to doubt the effectiveness of the American-style human rights.