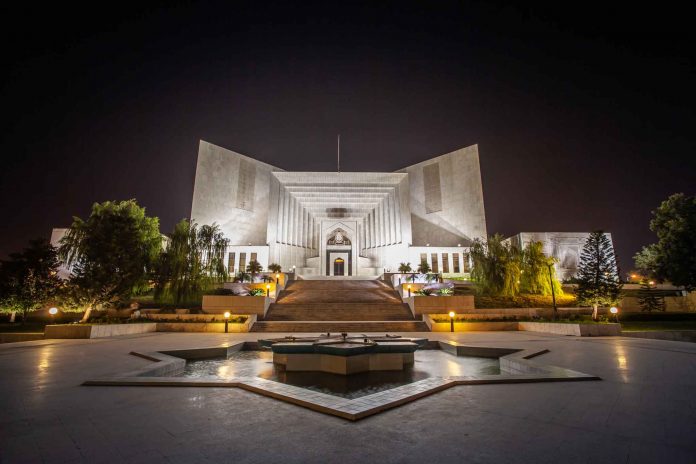 ISLAMABAD: The Supreme Court of Pakistan on Friday directed the authorities concerned to present the details of the cabinet members whose names have been removed from the Exit Control List (ECL). The directive came as a five-member larger bench of the SC resumed the hearing on a suo motu notice on the perceived apprehension of “persons in authority” undermining the criminal justice system. The court also sought a report on the method of amendments in the ECL rules and summoned Federal Investigation Agency (FIA) director-general and Law Director Usman Gondal in a personal capacity with records. “For now, the court is not nullifying the decision regarding the amendments in ECL rules,” CJP Umar Ata Bandial remarked. Later, the court adjourned the hearing for an indefinite period. During the hearing, the NAB prosecutor general informed the court that 174 individuals accused in NAB cases were removed from the ECL but the NAB wasn’t taken into confidence over it. He claimed that all the transfers NAB had made have been cancelled. After this, NAB banned more transfers. Moreover, the prosecutor general assured the court of having all the records preserved. The court directed the additional attorney general to submit a certificate issued by FIA DG to assure that FIA’s record is also preserved. Justice Ahsan remarked that the FIA DG will be responsible if the records lack anything. During the hearing, the top judge said that the apex court will take action against anti-state steps. “According to National Accountability Bureau (NAB), the names were removed from the ECL without the body’s approval.” He asked Attorney General of Pakistan (AGP) Ashtar Ausaf to read Section 2 of the ECL rules, according to which terrorists, tax defaulters and loan defaulters cannot travel out of the country. “At whose behest did the Cabinet amend the rules pertaining to people involved in corruption and defaulters. Did the federal Cabinet approve the amendment in rules?” the CJP asked. Responding to the question,

AGP Ausaf said that he would present the minutes of the Cabinet meeting for approval. Meanwhile, Justice Ijazul Ahsan inquired if a name would be removed from the no-travel list after 120 days on its own? At this, the AGP replied that the rule of 120 days will be applicable after the inclusion of a name in the list.Justice Mazahar Naqvi was of the view that the Cabinet members benefited from the amendment they approved. “How could the Cabinet members make amendments for their personal benefit,” the judge asked. The AGP maintained that he would find out if the members who were in the no-travel list were part of the committee that approved the amendments or not. Justice Muneeb Akhtar said that the court knows that the federal ministers have only allegations and nothing has been proved against them. “But is there a code under which it can be ensured that the file of the case isn’t forwarded to the same minister who is the accused in it,” he asked. Meanwhile, Justice Mazhar observed how a minister facing allegations could make amendments to the rules to benefit himself. “The amendments in ECL rules abolished the procedure to review. Isn’t the Cabinet’s approval for amendments a conflict of interest,” he asked. Justice Naqvi remarked that the person whom Azam Nazeer Tarar counseled benefitted. The judge inquired about the procedure that was adopted to amend ECL rules.