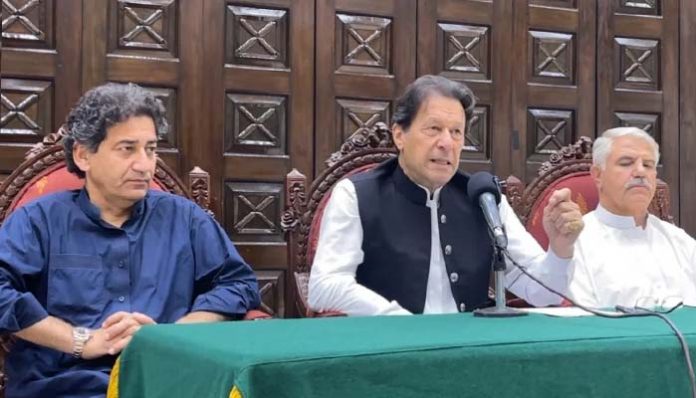 PESHAWAR: PTI Chairman Imran Khan Friday rebutted rumours of his party striking a deal with the establishment and said that he ended the “Azadi March” to avoid bloodshed. In a surprise move on Thursday morning, Khan gave a six-day ultimatum to the government to announce the election date, warning to return with three million people after chaos gripped the country and the army had to be called in for the protection of government buildings in Islamabad’s Red Zone. In a press conference — flanked by Khyber Pakhtunkhwa Chief Minister Mahmood Khan and PTI leader Atif Khan a day after the violent long march came to an abrupt end — Khan said he witnessed rising anger among the masses after the police crackdown on party leaders across major cities. “I had observed the anger rising among people against the police after the things they did to stop the march. Keeping that in view, if we had continued to march as announced, the country would have plunged into chaos and anarchy.” The PTI chairman slammed the government for the “brutal” crackdown against the protesters, saying Interior Minister Rana Sanaullah deployed police officers of his choice to crack down on the PTI workers. Refusing to accept “foreign slavery”, the PTI chairman said he would devise a plan within the next six days and take to the streets once again. “I am appealing to the entire nation: I have started a jihad against them [government]. The Supreme Court has an important role to play in this regard,” the ousted prime minister said. The PTI chairman added his party would be completely prepared before taking to the streets this time, adding that the PTI seeks the apex court’s protection.  He also warned the government of repercussions if it implements the same strategy of launching a crackdown in the next phase of the march. “Our people will not be arrested from their houses […] people were under the wrong impression that protesting was their democratic right,” the ex-premier said while taking a jibe at the government. On May 25 — the day the long march took place — internet speed was slowed down, therefore, the PTI was under the impression that the barricades and hurdles would be moved from their way, the cricketer turned politician said. “Since we know what the government can do, we will hold our march after planning it. Our aim will be not to spread further chaos, but let me make one thing clear: I will not accept the government of culprits.” Although Khan stressed that he would not accept the current set-up, the ousted premier said that “doors were open for negotiations, but a prerequisite for talks with the government would be that it holds snap elections in June.” Defending KP CM Mahmood for his participation in the long march.