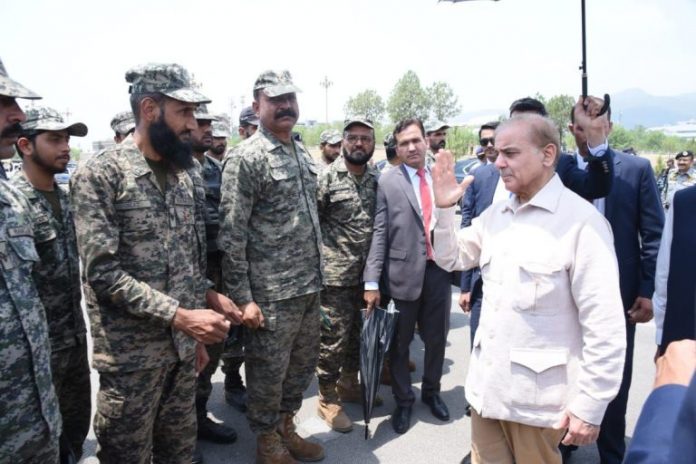 ISLAMABAD: Prime Minister Shehbaz Sharif Thursday ruled out the notion of receiving “dictation” from PTI Chairman Imran Khan and stressed that the National Assembly would make decisions regarding the date of the next general elections.  Although the prime minister said he “refuses to be dictated” during his hard-hitting speech in the NA, he did not rule out holding talks with the PTI after the party’s long march and rallies across the country — ones that led to chaos and compelled the government to summon the army in Islamabad. Addressing the lower house hours after the PTI chairman issued a six-day ultimatum to announce a date for the elections, the prime minister said holding talks is the ultimate weapon of politicians. “The doors for talks are open; I can form a committee.”  The prime minister said Pakistan was still in danger and told the PTI “mob” that its dictation would not work on the government as it wants to hold transparent elections — stressing that he would not succumb to pressure and hold snap polls. “Imran Niazi, let me make myself clear, you can dictate someone at home, but you cannot blackmail or intimidate the house,” the prime minister said in a strong message to the PTI chairman. The premier praised the NA and its members for passing the bill to abolish the former government’s election reforms giving overseas Pakistanis the right to vote through i-Voting and electronic voting machines (EVMs). “NA has laid the foundation of free and fair elections by passing this bill,” PM Shehbaz added. Shedding light on the current situation in the country, PM Shehbaz said that politicians should hold negotiations with patience as he criticised the PTI’s “Azadi March”.The premier said the PTI chairman is repeating the same mistake that he committed back in 2014, adding that a policeman was martyred and the same happened in 2014 with the police personnel who were performing their duties. The prime minister said the law enforcement agencies (LEAs) worked to stop the “unconstitutional” and “bloody” marches as he referred to the events that transpired a day prior. He berated the PTI for sprinkling salt on the wounds of the family of the police constable who was martyred in the line of duty — as the police raided the house of a PTI leader in Lahore. “They sprinkled salt on the wounds, can there be any crueller than this?” The prime minister prayed for the forgiveness of the policeman and announced a package for the LEAs’ personnel who sustained injuries during Thursday’s clashes. Moving on, PM Shehbaz then slammed Kyber Pakhtunkhwa Chief Minister Mahmood Khan for being involved in the PTI’s long march to Islamabad, asking when, in the history of Pakistan, has the machinery of a province used to launch an attack on the federation? “Has a province ever led an attack on the Centre? A province’s chief minister helped attack the Centre,” the prime minister asked while lamenting over the situation.