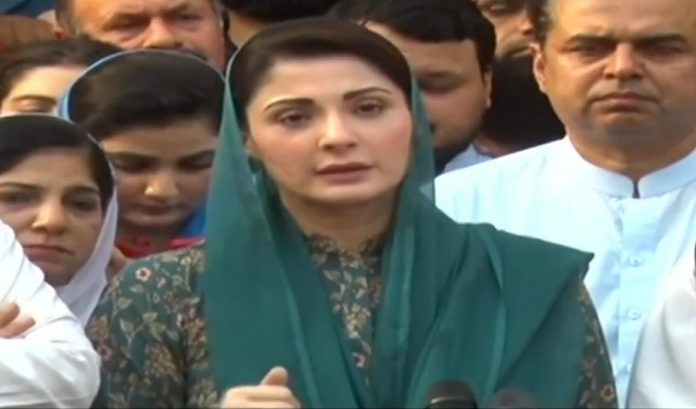 LAHORE: PML-N Vice President Maryam Nawaz Thursday berated PTI  Chairman Imran Khan and his party for being “responsible” for the martyrdom of a policeman, who laid his life in the line of duty a few days back in Lahore. Maryam was speaking to the press outside of the house of the martyred policeman, identified as Kamal Ahmed. She had gone there to meet Ahmed’s widow and his five children. “The martyred policeman’s wife also blames Khan for her husband’s death,” she said, adding that the PTI chairman has kept his own sons safe in London but “deprived these five children of their father by killing him.” She said that “real freedom” begins at one’s home, therefore, Imran Khan should first bring his children to Pakistan and teach them what real freedom entailed. Maryam said that the families of the martyred and injured soldiers will be compensated and the government will take care of them. “Prime MinisterShehbaz Sharif has said that the government will provide a house to and will bear the educational expenses of the deceased policeman’s children,” she added. Upon being asked about the “religion card” being used by the PTI workers, the PML-N leader said that religion was suffering harm because of the hypocrites who were using it to get votes. She added that the government should register a case against Khan because of whom two children lost their lives during the match while a constable was martyred.