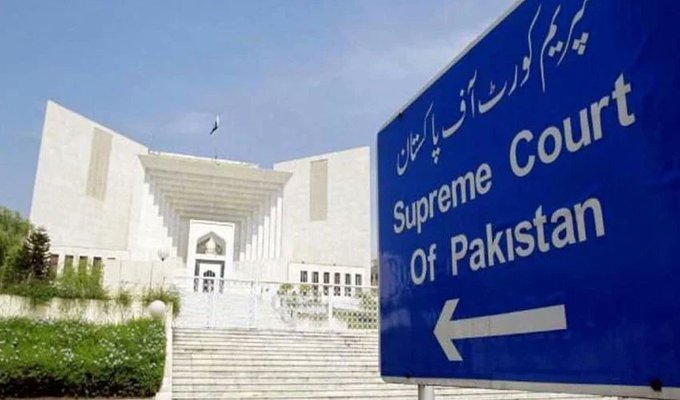 ISLAMABAD: The Supreme Court on Wednesday directed the federal government to provide the PTI with a ground between the H-9 and G-9 areas of Islamabad to hold its public gathering. The directives came during a hearing of the Islamabad High Court Bar Association’s (IHCBA) plea against the government’s decision to block roads to stop PTI’s “Azadi March” in the federal capital. A three-member bench of the SC, headed by Justice Ahsan, was hearing the plea. Islamabad chief commissioner and Inspector-General of Police (IGP) Akbar Nasir Khan appeared before the court during the hearing. Today’s hearing saw two breaks before the apex court issued the final order of providing the space to the PTI for the jalsa.   When the hearing resumed after the second break, the Attorney-General for Pakistan (AGP) Ashtar Ausaf Ali told the three-member bench that the ground, which will be given to the PTI, only had the capacity to accommodate 10,000 people.  He also added that a Sunday bazaar and the Sirinigar Highway were close to the venue. However, the bench did not pay any heed to the advice of the attorney-general and directed the government to provide security to the PTI’s gathering within three hours. During the hearing, Justice Ijaz Ul Ahsan asked PTI’s lawyer Babar Awan when the gathering will be held. “Till when will the gathering go on for?” asked Justice Ahsan. To this Awan, replied that the decision is for the political leadership to take. In response, Justice Ahsan remarked that the apex court can change its order, amend or take it back. He added that the bench will be monitoring the developments. “Talks between the government committee and PTI committee should be held at 10pm tonight at the chief commissioner’s office,” said the court. It directed the deputy commissioner, interior secretary, and inspector-general Islamabad to make sure the meeting take place. “Arrested political leadership and workers should be freed at once,” said the court. It also ordered the government to follow the point agreed between the JUI-F and PTI during the former’s 2019 long march. “Any new clause should be included in the agreement through mutual consultation and the court should also be informed about it,” said the bench. Before the break, the court had directed the authorities concerned to hold consultations over permission for the PTI rally on H9 ground and update the court on the outcome. The bench then adjourned the hearing of the case till 9:30am tomorrow.  Once the court sat again after the first break, PTI’s counsel Babar Awan presented the party’s request for permission to hold a rally at the H9 ground. Awan informed the court that Imran Khan has four demands which include the provision of H9 ground for the rally, the release of all the arrested party workers and leaders, and the removal of all the barricades that are blocking routes leading to Islamabad. AGP Ausaf conveyed Prime Minister Shehbaz Sharif’s message that he believes in the rule of law. He said that the premier has formed a committee which will decide on the venue for the PTI rally and the use of words. The AGP assured the court of protecting every citizen.