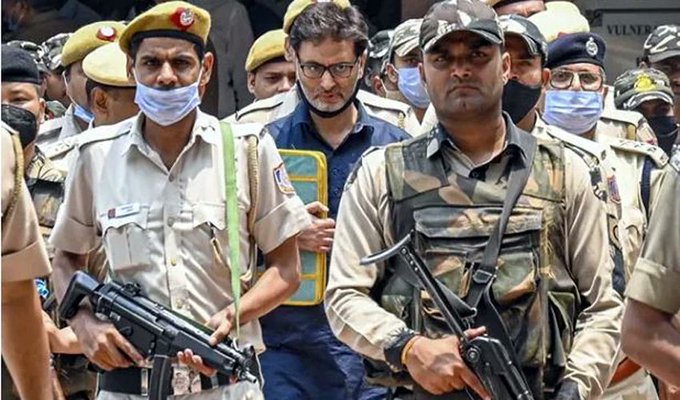 NEW DELHI: An Indian court Wednesday sentenced Kashmiri freedom fighter, Yasin Malik, to life imprisonment in a terror funding case, the country’s media reported. The National Investigation Agency (NIA) had sought the death penalty for the Kashmiri leader and chief of the Jammu and Kashmir Liberation Front (JKLF), but the court awarded him two life imprisonments, according to the Times of India.  The NIA court handed down two life sentences and five 10-year terms of rigorous imprisonment, which will run concurrently. Moreover, a penalty of ₹1million has also been slapped on the Kashmiri leader, according to NDTV. The Hurriyat leader was convicted in the terror-funding case last week after he pleaded guilty to all the charges last Tuesday, including the ones under the Unlawful Activities Prevention Act (UAPA). Yasin had refused to contest the charges, including Section 16 (terrorist act), Section 17 (raising funds for a terrorist act), Section 18 (conspiracy to commit a terrorist act) and Section 20 (being a member of a terrorist gang or organisation) of the UAPA and Sections 120-B (criminal conspiracy) and 124-A (sedition) of the Indian Penal Code.  The Indian government arrested the Hurriyat leader in 2019, the same year when the special status of Indian occupied Jammu and Kashmir was revoked. Malik’s wife Mushaal Hussein Mullick said the sentencing was illegitimate. “Verdict in minutes by Indian kangaroo court,” she wrote on Twitter. “The iconic leader will never surrender.” In Kashmir’s main city of Srinagar, police fired tear gas and pellets to disperse stone-pelting protesters outside Malik’s residence. In response, Prime Minister Shehbaz Sharif said “today is a black day” for Indian democracy and its justice system, noting that despite the order, the idea of freedom Malik symbolises could never be imprisoned. “Life imprisonment for valiant freedom fighters will provide fresh impetus to Kashmiris’ right to self-determination,” the prime minister said in a condemnation tweet. In a statement on Twitter, Foreign Minister Bilawal Bhutto-Zardari strongly condemned the unjust sentencing of the Hurriyat leader in a sham trial. “India can never silence Kashmiris’ voice for freedom and self-determination. Pakistan stands with Kashmiri brothers and sisters, will continue to provide all possible support in their just struggle,” he added. Former president Asif Ali Zardari strongly condemned the sentencing of Malik and noted that he is a hero of the struggle for independence of occupied Kashmir. “Imprisonment and torture cannot break the resolve of [….] Malik,” the former president said in a statement. Director-General of the Inter-Services Public Relations (ISPR) Maj Gen Babar Iftikhar, in a statement, strongly condemned the life sentence awarded to Malik on fabricated charges. “Such oppressive tactics cannot dampen the spirit of people of Kashmir in their just struggle against illegal Indian occupation. We stand with them in quest for self-determination as per UNSCRs,” he added.