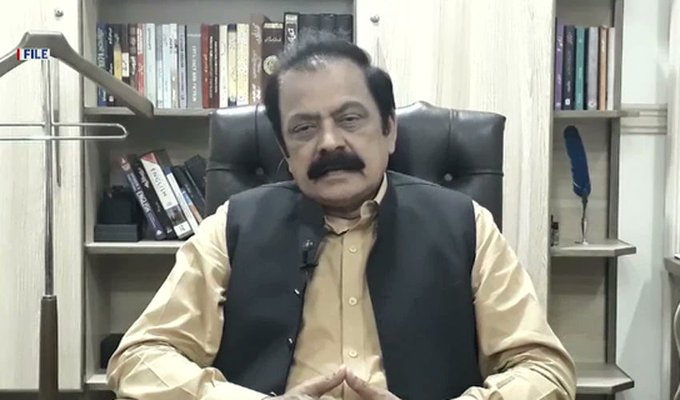 ISLAMABAD: The federal cabinet has decided not to let PTI go ahead with its long march in order to avoid the spread of “fitna” and “fasad”, Interior Minister Rana Sanaullah announced Tuesday, saying PTI’s long march is not democratic. Addressing a press conference flanked by the leaders of coalition parties, Rana Sanaullah said that the participants of the long march will be stopped. Keeping the current political situation and PTI’s 2014 long march in view, he said the federal cabinet has decided they will not allow PTI to spread “fitna” and “fasad” in the name of a “democratic long march.” “The decision has been taken to stop them from spreading their agenda of manipulation and division,” the interior minister said, adding that these people [PTI leadership] have moved from “abuses to bullets”. The minister was referring to constable Kamal Ahmad, who was gunned down last night during a police raid at a PTI leader’s house in Lahore’s Model Town. Sanaullah claimed that the PTI leadership has disappeared from their residences and has gathered in Khyber Pakhtunkhwa. He claimed that they [PTI leadership] are planning to use the province’s resources and personnel to “come and attack the federation”.”They want to come as a mob that has no legal or constitutional status…this cannot be allowed.The interior minister said that former prime minister and PTI Chairman Imran Khan wanted to divide the nation. Warning the PTI supporters, he said: “Don’t be misled by Imran Khan. He directed his party members during rallies to call people from other parties robbers and traitors. This is how he wants to spread chaos and disorder.” “Everybody has the right of freedom of expression and peaceful protest; however, the PTI did not want a peaceful protest,” he said, adding that if they hadn’t called it a “bloody march”, the government wouldn’t have stopped them. The interior minister said that the protection of the lives and properties of the capital’s people is the responsibility of the government and it will fulfil its duties “at all costs”.