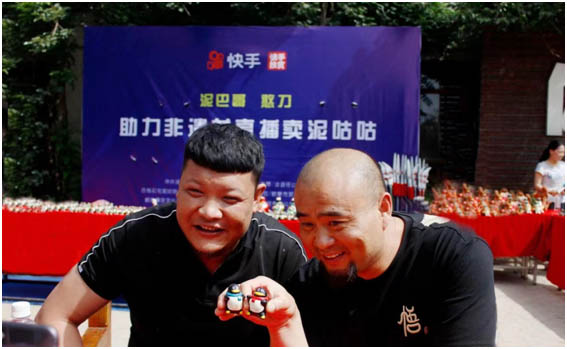 “Let’s go get some saplings,” said a villager. Then a truck “rumbled” out of a village; villagers carefully selected saplings at a stall; and then the saplings were planted with the help of crane.

These realistic scenes come from a short video showing country life on Chinese short video-sharing platform Kuaishou. What’s so special about the video, which has been viewed over 700,000 times, is that the people and settings in it are made from mud.

Zhu has posted short videos on Kuaishou to tell stories about his hometown with mud figurines, vehicles and houses he made. Known as “Nibage” on Kuaishou, which means “the guy who plays with mud” in Chinese, he has attracted more than three million followers on the platform.

Making clay sculptures, also known as Mud Cuckoos, is a long tradition in Xunxian county as well as national intangible heritage in China. Villagers in the county knead the premixed mud over and over again, paint patterns on it, and then color it, eventually creating lifelike clay sculptures.

If people blow at the little holes in these clay sculptures, they will make quick notes that sound like the call of cuckoo, which is why the sculptures are called Mud Cuckoo.

As more and more young and middle-aged residents of the village leave their hometown to seek work in other places, the inheritance of Mud Cuckoo making once faced serious challenges.

Fortunately, a short video of clay sculpture made by Zhu unexpectedly drew wide attention to the traditional handcraft and led to its revitalization.

In 2017, a video of clay sculpture made by Zhu received over two million views, which made him pleasantly surprised and ignited his passion for creation. He began to busy himself with scripting his short videos, making clay sculptures and interacting with netizens.

Gradually, more and more people joined him in making the videos. “We learned from online courses how to move the camera and dub the videos and what kind of stories netizens like. As our videos become more popular, many people come to seek advice from us on shooting techniques,” Zhu said.

While the quality of his videos has been continuously raised, Zhu has also improved his craftsmanship for making Mud Cuckoos. “We also learned from Wang Xueren, a provincial-level inheritor of the national intangible heritage,” Zhu said, adding that although clay sculptures are small artworks, they still require plenty of skills.

“During my first livestreaming show for selling clay sculptures, nearly 200 orders were placed and all the products I prepared for that show were sold out within seconds. I never expected clay sculpture to be so popular with netizens,” Zhu recalled.

Zhu has also motivated his fellow villagers to join him in promoting Mud Cuckoos. He introduced the history of the traditional handcraft in his videos and recorded how senior residents in the village make clay sculptures at their homes. “We have helped more than 100 craftsmen sell nearly 100,000 clay sculptures,” Zhu said.

“Nowadays, videos of intangible cultural heritage are posted on Kuaishou every three seconds, with a cumulative views exceeding 224.5 billion,” Zhou said, adding that more than 190 million monthly follow and learn agricultural knowledge through the platform.

Digital technologies have injected impetus into rural culture and brought folk crafts, customs and other forms of excellent rural traditional culture back to life.