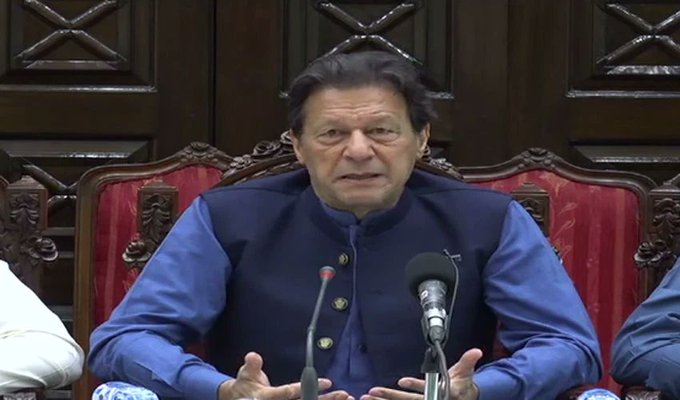 PESHAWAR: PTI Chairman Imran Khan plans to carry on with the party’s “Azadi March” despite the government’s decision earlier today to stop the long march towards Islamabad.  Khan, while addressing a press conference in Peshawar, said he will lead the “biggest procession in Pakistan’s history” tomorrow. The PTI chairman’s speech comes after a countrywide police crackdown against members and leaders of the PTI. A policeman also lost his life in one of the raids after which the government said it would not allow the PTI to have its long march scheduled for tomorrow (May 25). Criticising the PML-N-led government, Khan said that he has been seeing the Sharif family adopting the same tactics that military dictators do since 1985. “They only remember democracy as soon as they leave power,” he said, asking how many times these parties have taken to the streets throughout the PTI government’s term. “They entered the houses of people and didn’t care for the privacy of women,” he said, adding that the PTI government never tried stopping the then opposition leaders from exercising their right to assemble and stage protests. The former prime minister then asked if the PTI government made any arrests when PPP Chairman Bilawal Bhutto-Zardari and JUI-F Cheif Maulana Fazlur Rehman marched towards Islamabad. Khan condemned that the police entered the house of a retired army major while referring to a video that surfaced on social media, in which a girl could be in seen tears and claiming that the cops had “harassed” her. “Do we want to make the country Quaid-e-Azam’s Pakistan or the Pakistan of these thieves and robbers?” Imran Khan asked and said that 60% of the federal cabinet comprises criminals who are roaming freely after attaining bails, while they still have cases of corruption worth Rs24 billion against them. “The crime minister and his son had to be sentenced but now they are making decisions for the country,” he said and claimed that the PTI has not broken any law in its 26 years of political history. The PTI chairman said that it was the democratic right of his party to carry on with the said that PTI’s “Azadi March” is the party’s democratic right. “We are marching to Islamabad because it was proved in the National Security Council (NSC) meeting that a foreign conspiracy was hatched and the [PTI] government was toppled,” Khan said, adding that those who have been criminals for the last 30 years were brought into power. Calling out to the judiciary of Pakistan, the PTI leader said that the courts’ reputation would be tarnished if it permitted what was happening in the country and their silence would “prove that there was no democracy in the country”.”