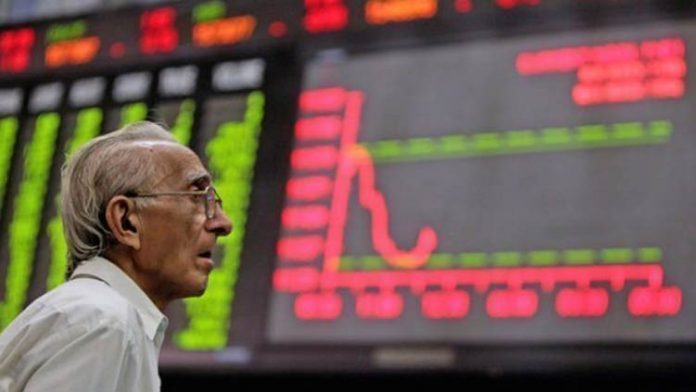 KARACHI: The benchmark KSE-100 index of the Pakistan Stock Exchange (PSX) plunged on Monday, the first day of the rollover week, as an across-the-board selling spree pushed share prices into the red zone. The delay in tough economic decisions by the coalition government and heightened political uncertainty has unnerved investors. Moreover, the Pakistani rupee remains in a downward spiral with the US dollar gaining another 0.39% on Monday to close at 200.93. The index remained jittery over concerns regarding monetary policy tightening which was to be announced after the session. It is worth mentioning that contrary to market expectations the State Bank of Pakistan (SBP) raised the benchmark interest rate by 150 basis points to 13.75% for the next six weeks in order to stabilise inflation and economic growth. Moreover, uncertainty regarding the ongoing talks between Pakistan and the International Monetary Fund (IMF) mission for the revival of the stalled multibillion-dollar programme took a toll on the market. At close, the benchmark KSE-100 index closed at 42,440.25 after losing 660.46 points or 1.53%.A report from Arif Habib Limited noted that the market witnessed a bloodbath session as investors remained bearish throughout the day. “The benchmark KSE-100 index nosedived from the beginning of the session as an increase in the political noise over the weekend and uncertainty regarding resumption of IMF programme along with continued depreciation of Pakistani rupee against the US dollar and rate hike in the Monetary.policy, shattered investors’ confidence,” the report noted.