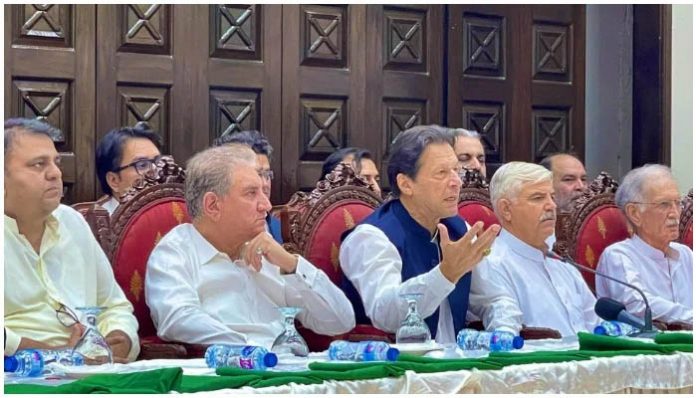 PESHAWAR: The Pakistan Tehreek-e-Insaf (PTI) Sunday announced a long march towards Islamabad on May 25 to press on its demands of the dissolution of National Assembly and a fresh general election. PTI Chairman and former prime minister Imran Khan made the announcement after chairing a meeting of the party’s Core Committee. Flanked by party leaders here at the CM Houser, told a news conference that the PTI’s Core Committee had decided the date of long march. He said he would meet the workers at Srinagar Highway, Islamabad at 3 p.m. on Wednesday, and invited people from all walks of life to join his long march. Imran Khan said it was not politics, but a ‘Jehad’ to protect Pakistan. He and his party leadership were ready to even sacrifice their lives for protecting the independence and sovereignty of Pakistan. He asked the bureaucracy and police not take any unlawful action against the PTI’s long march as it would be peaceful and the sit-in would continue till acceptance of the demands. He demanded that the next general election should be free, fair and transparent and he would accept the results.