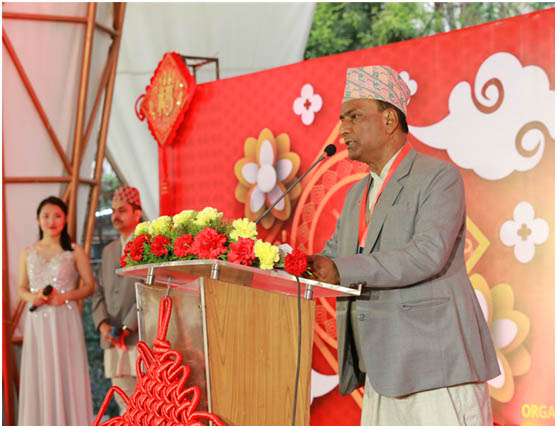 When the reporter walked into his office, Harish Chandra Shah, President of Nepal China Cultural and Educational Council, just finished a day’s work.

Harish was voluble on topics about China. “I took all these photos in China. There is a story behind each of them,” he said, pointing at dozens of photos displayed in a bookcase in his office.

Harish, his father and children have all forged a special bond with China. “My father paid a visit to China when I was little. After he returned home, he told me that the Chinese people are kind and hospitable and that China is the most reliable and a true friend of Nepal, which greatly influenced me. I always wanted to visit China since I was young,” he said.

In 1977, then 20-year-old Harish went to study in China. In the following seven years, he lived and studied in Beijing, and toured Hebei and Sichuan provinces and other places in China, witnessing how China took its first steps in implementing reform and opening-up.

After he got back home, Harish chose a job that promotes friendly exchanges between Nepal and China. Because of his influence, Harish’s son and daughter also studied in China, and his wife has taught herself Mandarin. “Our family can speak with each other in fluent Mandarin,” Harish told People’s Daily.

Harish shared with the reporter his visit to a village in southwest China’s Yunnan province.

“In 2019, I took an investigation tour of a village near Kunming, capital city of Yunnan province, as a member of an investigation group. The local people have become better off by growing vegetables and flowers, some of which are sold to Malaysia and Indonesia. As the village speeds up development, new school, clinic and elderly care center have been built and residents have lived a better life,” Harish noted.

Harish learned from local residents that the village was really poor just a few years ago and that it has been with the help and under the guidance of resident officials sent to the village for poverty alleviation that the village has taken on a new look.

“When I was there, I felt villagers’ heartfelt support for these resident officials and for the Communist Party of China (CPC). Only such a political party that adheres to a people-centered approach and leads the people to a better life can be popular with and supported by the people,” Harish pointed out.

Three volumes of the English edition of “Xi Jinping: The Governance of China” were placed in a conspicuous spot in the bookcase in Harish’s office. The book series by Chinese President Xi Jinping have answers to all the questions related to the miracles in modern China, according to him.

“I joined in the translation of the book series into Nepali. During the process, I consulted a large number of materials, from which I gained a better understanding of the Chinese leader’s foresight in governance and how he always keeps the people close to his heart,” Harish said.

Harish pointed out that the lasting friendship between Nepal and China has been built on the basis of mutual respect and assistance.

After a major earthquake hit Nepal in 2015, China stood firmly with the Nepalese people in Nepal’s disaster relief and post-disaster reconstruction. While overcoming difficulties and fulfilling its commitments to Nepal, China helped the latter achieve positive results in earthquake relief.

During the global fight against the COVID-19 pandemic, China has also lent a hand to Nepal and provided COVID-19 vaccines for the country just when it was in need of them.

“China has provided vaccines for and donated anti-epidemic supplies to us. Such timely and heart-warming help truly demonstrates the close friendship between our two countries,” Harish noted.

According to Harish, China has not only provided vaccines for other developing countries including Nepal to close the “immunization gap”, but carried out win-win cooperation with many other countries in the joint construction of the Belt and Road to stabilize global economic development and actively practice the idea of building a community with a shared future for mankind.

“I believe that with the joint efforts of the two governments and peoples, the Nepal-China friendship will bear more fruits,” he said.

Harish Chandra Shah, President of Nepal China Cultural and Educational Council, delivers a speech at an activity held by the council to celebrate the Chinese Lunar New Year, March 2018.