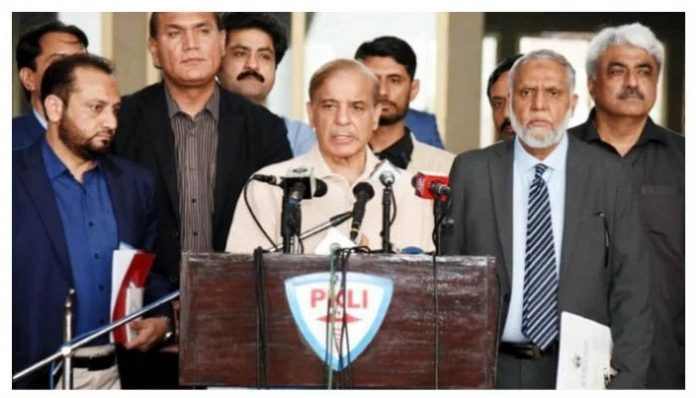 LAHORE: Prime Minister Shehbaz Sharif on Sunday said that the Pakistani nation would not spare PTI Chairman Imran Khan if he tried to instigate a civil war in the country. Addressing a press conference in Lahore after visiting the Pakistan Kidney and Liver Institute (PKLI), the premier criticised the previous PTI-led government and said that instead of working on the development of the country, Khan was consumed by political vendetta throughout his tenure.  Censuring the PTI chairman, the premier said that Khan’s only focus was to corner his opponents but he had no time to invest in building hospitals, roads, or work towards the prosperity of the nation.  He said that thousands of people lost their means of employment but Khan, against his promise of providing 10 million jobs to the masses, could not deliver.  “Imran Niazi had nothing to do except for hurling abuses at his opponents,” he said, adding that the man who claimed of making a Naya Pakistan could not even provide a single subsidy to the masses. “Khan is a cold-hearted man. The kind of language he uses embarrasses everyone,” PM Shehbaz said. “This man destroyed the moral values of society.” Speaking about the PKLI, the premier said that it was “regrettable” how this Rs20-billion project was “shut down by the PTI government just for the sake of political revenge”.”This hospital will provide paid medical facilities to the affluent class and funds generated from the treatment of rich people will be utilised for free medical treatment of patients belonging to underprivileged backgrounds,” the premier said. The premier announced that the hospital’s board of governors, with Dr Saeed Akhtar as its new chairman, has been reinstated so that the hospital could function smoothly. PM Shehbaz also expressed his commitment to establishing a world-class nursing university at the (PKLI) within one year.  “Strengthening of democracy was the only way for Pakistan to progress,” the premier said.