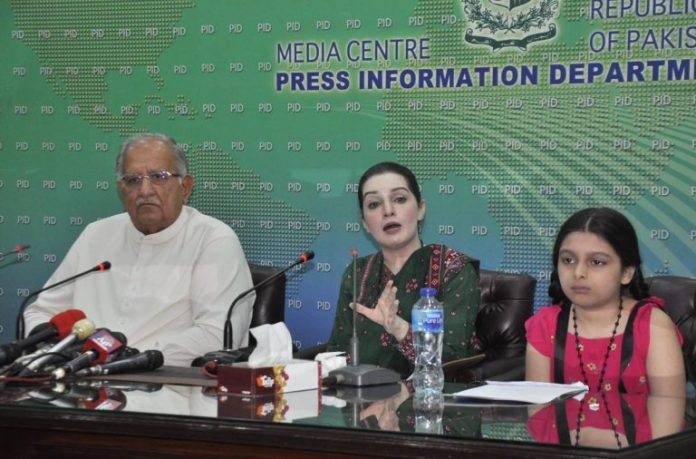 ISLAMABAD: The senior Hurriyat leader Mushaal Hussein Mullick demanded the United Nation to intervene and stop the fascist Narendra Mod-led government from convicting Chairman of Jammu and Kashmir Liberation Front Yasin Malik in fabricated and fictitious cases. Speaking at a press conference along with former Deputy Speaker Faisal Karim Kundi here on Sunday, Mushaal said that the international community, UN bodies and human rights organizations should wake up from their deep slumber as brutal Indian authorities were all-set to convict her husband in fake cases on May 25. The Hurriyat leader said that Yasin was constantly physically and mentally tortured in the notorious Tihar prison, where he suffered from a brain haemorrhage. She revealed that Indian brutal authorities have crossed the limits of barbarism and fascism as he was even not allowed to speak what to talk of a free trial. Mushaal went on to say that the senior Hurriyat leader was kept in solitary confinement as even his family members were not allowed to meet him. Mushaal, who is also Chairperson of the Peace and Culture Organization, stated that Yasin was suffering from several diseases but he has been deprived the much-needed life-saving drugs due to which his health was so deteriorated that even it was difficult to recognize him in the video. “Even international basic rights guaranteed for prisoners are not also given to Yasin Malik,” she said. Yasin’s spouse also demanded of the Pakistani government to declare the Kashmiri freedom fighter a prisoner of consciousness and led a global campaign against Malik’s conviction in fabricated cases by the Indian courts. “I request the government of Pakistan to give me and my daughter access to Yasin Malik, to talk to them, and to launch a global campaign to get him out (from the Indian custody),” she added. Mushaal said her husband in Tihar Jail was not being provided counsellor access and the right to a fair and transparent trial for his defence. “We are deprived of our due rights and my daughter has not listened to her father during the last eight years,” she said. She said that denying Yasin the right to a transparent and free trial, was an open violation of international law and human rights but the world at large observed criminal silence in this regard. She urged that the international community should take notice of India’s blatant violations of international law and human rights protocols against Yasin and he should be declared a protected personality.