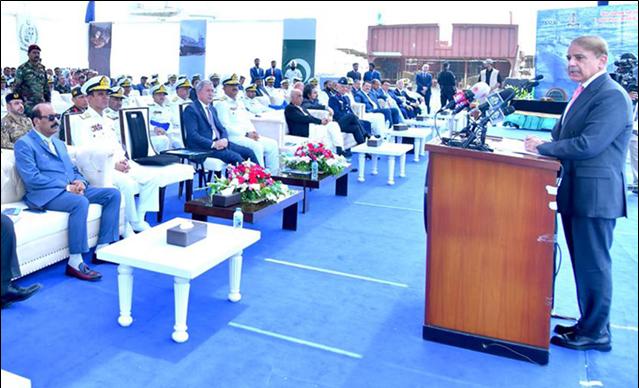 KARACHI: Prime Minister Shehbaz Sharif on Friday addressed the business community in Karachi and sought solutions to the economic woes that the country is undergoing. During his speech, the premier asked businessmen to speak about their problems and said: “We need to analyse the economic situation with patience.” The premier then requested the business community to provide solutions as the local currency has lately been fluctuating significantly against the US dollar. “I am not here for political point-scoring,” the premier clarified, stressing that he wants to know the solutions to the problems faced by the business community. Regarding the rising rates of the US dollar against the Pakistani rupee, he highlighted that the greenback was Rs118 back in August 2018; however, when the coalition government was formed after ousting former prime minister Imran Khan through a vote of no-confidence back in April, the country’s economy was in dire straits.  The Pakistani rupee surpassed the startling milestone of 200 against the greenback a day earlier. “When I took the oath on April 11, the rate of US dollar against the Pakistani currently was 182.” “The Rs60-65 increase in the rupee value against the greenback wasn’t the coalition government’s fault,” he said, adding that when the former government speculated that they would be ousted, they reduced the petroleum prices despite a price hike in the international market, thus going against the conditions of the International Monetary Fund .(IMF). Criticising the previous government, the premier said that the previous government did not provide any relief to the people of Pakistan in the last four-and-a-half years. “During the PTI’s tenure loans worth Rs22,000 billion were taken which shows an 80% increase from 2018,” he said, adding that “powerful echelons” in the country supported their “favourite” person. He further added that if the PML-N government would have been given 30% of this support the economy would have flourished.