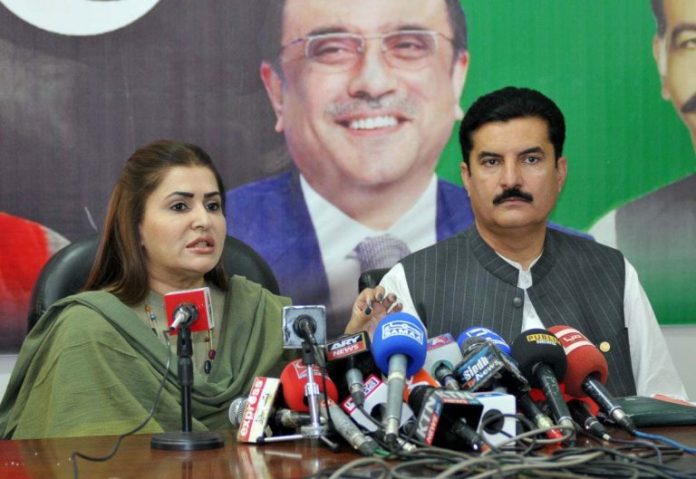 ISLAMABAD,:Federal Minister for Poverty Alleviation and Social Safety, Shazia Atta Marri Wednesday said the coalition government was striving hard to resolve the multiple issues being faced by the country.

Addressing a presser along with the Spokesman, Pakistan Peoples Party, Faisal Karim Kundi, the minister said Imran Khan and his team had played havoc with the country. “Now the era of oppression and a tyrant ruler has been over”, she said.

Shazia Marri said that the country had been facing multiple issues at this time due to the ineffective policies of the former Prime Minister, Imran Khan. “It could have drastic for the country, if he would remain in the government for more time”, she added.

The minister stated that we had not abused people like Imran Khan rather voiced the people’s concerns.
She said that the government led by Imran Khan imposed inflation on masses through increasing the price of flour from Rs 700 to Rs 1100 while dollar rate was increased from Rs 105 to Rs189 in his tenure, resulting in rupee devaluation.

She said that the PTI government borrowed Rs 20000 billion from IMF during its more than 3.5 years tenure through accepting the dangerous conditions about which the masses were unaware.

She said that Imran Khan led government increased the prices of urea, gas and electricity multiplying the sufferings of the masses. “Students, government employees, farmers all remained on roads to protest against the government unwise policies and no one was there to listen to their grievances”.

Criticizing the statements of Imran Khan during the public meetings, Shazia Marri said, “Imran Khan is saying that if he is not in the government, this country should not exist”. All such narratives and statements are spreading hatred among the masses and proving as disservice for the country.

She said Imran Khan was right when he said, “He will be more dangerous when ousted from the government. He has actually become more dangerous for the country”.
Imran Khan has not even spared House of Allah (Masjid-e-Nabvi) and caused a rukus there, going below the belt which is highly condemnable.

Shazia Marri questioned that where were the five million houses, five million jobs and 150 universities for which Imran Khan has promised.
He remained unable to construct even a single dam or a university. “Imran Khan miserably failed to fulfill all his promises and cannot utter even a single sentence on his government performance in public meetings”.

She said Imran Khan was only spreading hatred and provoking masses through false narratives and lies in the public meeting.
Imran Khan has not revealed his own corruption how he misused the charity funds meant for hospital construction for his political career. “All his politics is based on conspiracies”, she added.

The foreign funding case again Imran Khan has not decided for the last eight years and he is saying that this case is based on a conspiracy. “Why Imran Khan asked Election Commission of Pakistan not to reveal its findings to the public”, she asked.

Responding to a question, Shazia Marri said that the cabinet meeting discussed the public issues and violation of constitution. “Imran Khan is now worried of breaching the constitution that is why producing false stories”, she said.

To another question, she said every government should be concerned about the prices of daily commodities including potatoes, tomatoes, flour, sugar and pulses.
Responding to another question, she said all the PTI MNAs including former speaker National Assembly are still availing salaries, allowances, car facility and accommodation in Parliament Lodges.

She urged the PTI MNAs to support the coalition government for electoral reforms as they are availing all the privileges.
On the occasion, Faisal Karim Kundi said that Pakistan was going to improve good relation with United States of America (USA), European Union and all the countries for which Minister for Foreign Affairs, Bilawal Bhutto was in USA on official tour.

He said Chairman Pakistan Tehreek-e-Insaf (PTI) Imran Khan should tell about the performance of his government to the masses in public gathering despite criticizing the national institutions.
Faisal Kundi said that at the time of appointment of Chief Election Commissioner, Imran Khan had said that he was a good person but now is criticizing.

He said that PTI chief was misusing the resources of Khyber Pakhtunkhwa government to attend the public gathering across the country.
The spokesman said that PPP would make legislation on Medical Teaching Institutions system.

Faisal Kundi said that now Imran Khan was demanding security due to life threat but unfortunately that person took back the security of JUI-F chief Maulana Fazl-ur-Rehman, Aftab Khan Sherpao and other political leadership which resulted in terror attacks on them.