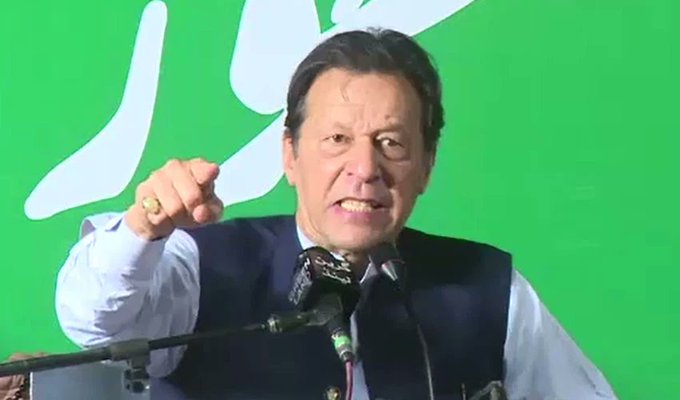 FAISALABAD: PTI Chairman and former prime minister Imran Khan on Sunday said that if anything happened to him, the Pakistani nation will seek justice on his behalf.  Addressing a jalsa in Faisalabad, Khan referred to a statement he had issued a day ago in Sialkot, where he had claimed that he had recorded a video of the characters behind the “conspiracy” against his government, and if something happens to him, it will be released.  Khan had said a “conspiracy” was being hatched to take his life — and despite knowing about it earlier, he has now enough evidence to confirm it. Reiterating his belief that there was a US-backed plan that made the no-confidence motion against his government successful, Khan on Sunday said that he already knew that plotting related to his ouster was taking place behind closed doors.  He then questioned the incumbent coalition government whether it was capable enough to take care of the prevailing situation, referring to the rising price of the dollar against the Pakistani rupee and the ensuing inflation in the country.  “I ask the media of the country to inquire from a common man the rates of potatoes and tomatoes,” he said.  He then went on to say that owing to the rife corruption in the country, no big criminal was ever arrested.  “We are yet to find out who was behind the assassination of Liaquat Ali Khan,” he said and repeated how US Assistant Secretary of State for South and Central Asian Affairs Donald Lu had threatened the Pakistani ambassador of “consequences” if Khan wasn’t removed from power. Khan also criticised Foreign Minister Bilawal Bhutto-Zardari and said  that since he is now going to meet United States Secretary of State Antony Blinken, he will “beg him for money” so that “Imran Khan could not come back into power.” The former prime minister claimed that Blinken knows well where Bilawal and his father, Asif Ali Zardari, have stored their money across the globe.  “Since all of Bilawal’s wealth is stored outside of the country, he cannot dare to upset the US, otherwise he will lose everything,” Khan said. Khan said that the United States never helps any country without seeing its own interest. “The US will tell Pakistan to stop talking about Palestine,” he said, adding that the US cannot dare to dictate to India because it was a free country.  “The US has made Pakistan a slave without having to invade it,” Khan said. “The people of Pakistan will never accept the imported government”.Ever since his ouster from power, the PTI chairman has been holding a series of jalsas in different cities, including Karachi, Mianwali, Lahore, Peshawar, and Sialkot, as he rallies his party workers and leaders against the government ahead of the Islamabad march.