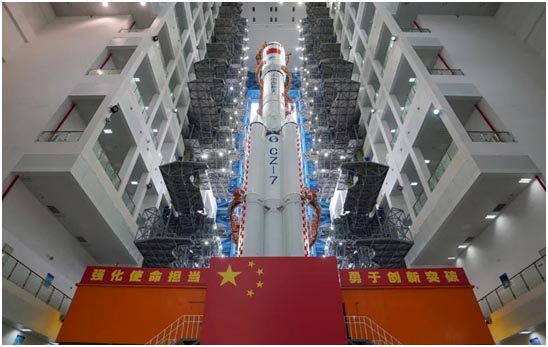 The Tianzhou-4 cargo spacecraft successfully completed status setting after entering orbit. At 8:54 a.m. on May 10, Tianzhou-4 conducted a fast automated rendezvous and docking at the rear docking port of the Tianhe core module of China’s space station, delivering goods to its destination within few hours after launch.

All the food, clothing, equipment and other supplies astronauts need for long-term stay in space must be carried to space station in time by cargo spacecraft, as well as the fuel the space station requires to maintain its orbit.

This time, before the arrival of the three crew members, the Tianzhou-4 cargo ship carried the necessary supplies for the forthcoming six-month Shenzhou-14 crewed mission to the space station. The cargo vessel brought more than 200 sets of items into orbit, including consumables for the Shenzhou-14 crew, propellants, gadgets, equipment, and samples for application experiments and testing, as well as replacement components and payloads.

Tianzhou-4, after rendezvous and docking with the combination of the space station core module Tianhe and the Tianzhou-3 cargo craft, joined the combination.

In order to ensure supplies can be delivered to the space accommodations safely, the Tianzhou-4 cargo spacecraft has used cargo bags, racks, and storage tanks to carry goods. The categories and quantities of the transported goods vary according to the needs of the space station.

Simultaneously, the cargo craft can also undertake tasks including controlling the attitude and orbital trajectory of the space station and supporting space science experiment.

According to a designer with Shanghai Academy of Spaceflight Technology, the construction of China’s space station is like putting together building blocks, and the docking mechanism is the joint that connects various modules with each other.

The docking mechanism is going to face bigger tests this year as it will need to connect the Wentian and Mengtian lab modules with the space station combination.

During the construction of the space station, the docking mechanism needs to handle various ways of docking of spacecraft whose weights range from 8 to 180 tons. Besides, huge docking energy can be generated during the process, which poses high requirements on the docking mechanism’s buffering and energy dissipation capacity.

To make sure two heavyweight spacecraft can dock with each other successfully, designers have carried out massive studies and research on relevant plans and finally mastered the key technology.

The launch of the Tianzhou-4 cargo spacecraft is expected to be followed by the launch of the Shenzhou-14 crewed mission in June, the Wentian lab module in July, and the Mengtian lab module in October. The two lab modules and the Tianhe core module will form a T-shaped structure, with the core module at the center and the two lab modules attached to each side of it. The formation of the basic structure will signal the completion of the space station.

Hao Chun, director of the CMSA, says that upon the completion of the in-orbit construction of the space station this year, it will enter a phase of application and development that is expected to span over 10 years.