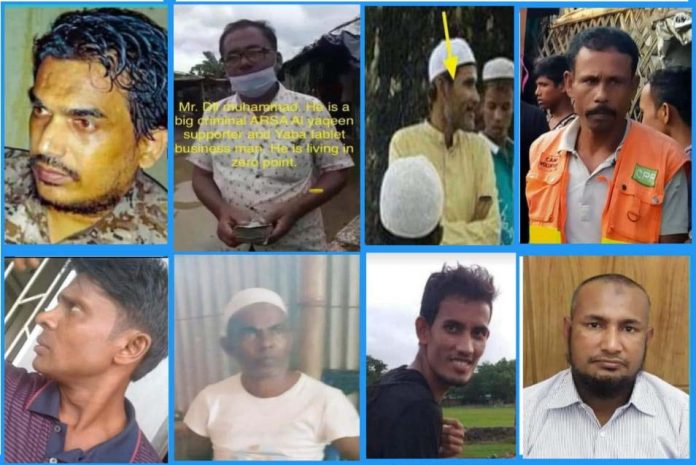 Various weapons are coming from Myanmar in an attempt to create ‘instability’ in the Rohingya camps in Cox’s Bazar.The issue of drug and arms smuggling from Myanmar to Bangladesh using Rohingyas has been going on for a long time.The activities of Rohingya armed terrorists, members of Arsa or Al Yakin, around the Ukhiya Rohingya refugee camps have terrorized the Rohingyas as well as the locals.  Drug, yaba, gold smuggling, human trafficking, Ransom after the abduction, extortion and rape are creating fear in the camp.Behind all this is the Rohingya-controlled armed forces Arsa or Al-Yakin.The terrorist group now known as ‘Arsa’, the iconic terror in the camp.This information was obtained by searching and talking to ordinary Rohingyas. 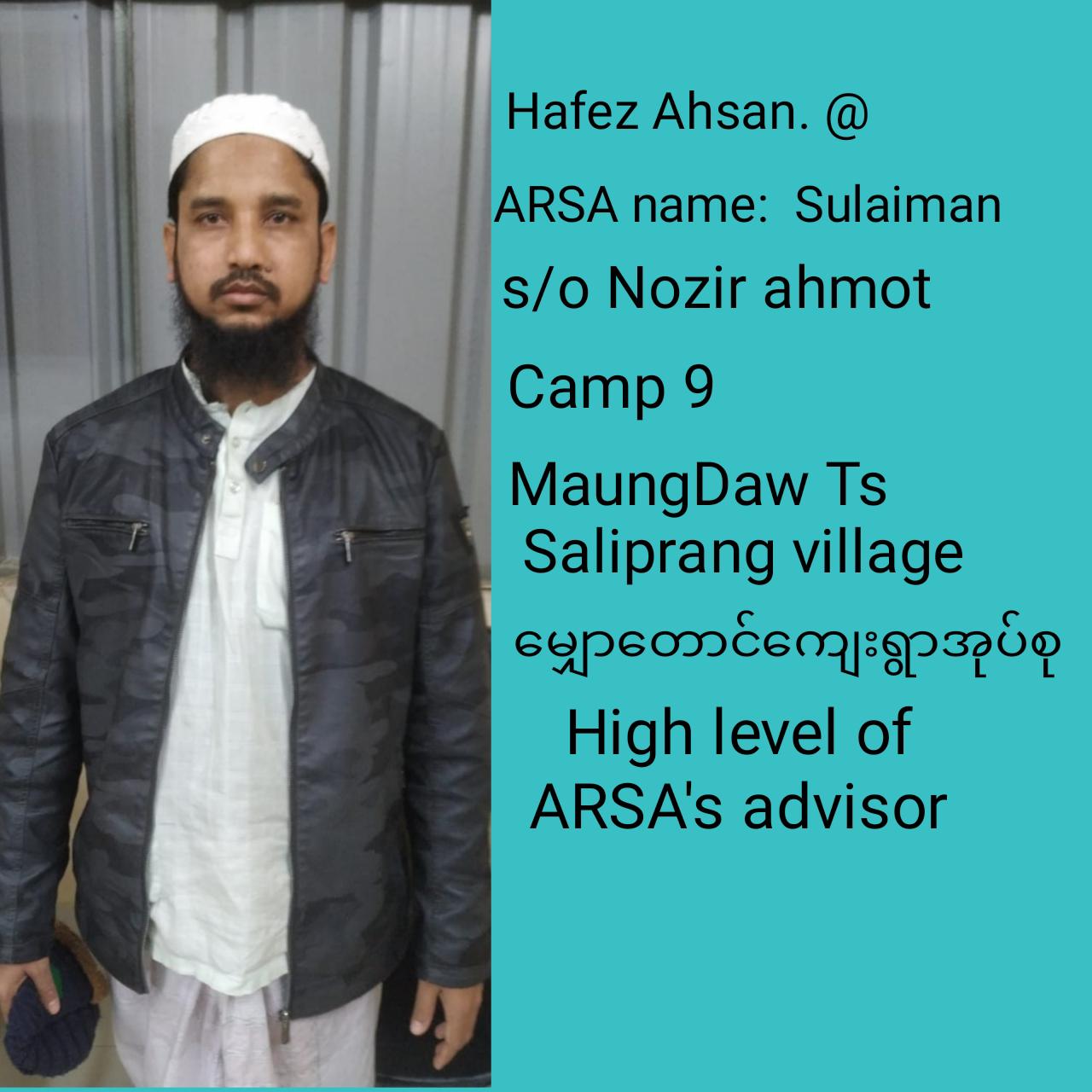 Hafez Ataullah alias Abu Ahmed Jununi, the main leader of Arsa or Al Yakin Rohingya terrorists.With this Jununi, 4/5 members are on full-time armed guard.His other members live in different camps including Balukhali Camp 8/E block.Abu Ahmed Jununi is a Rohingya born in Karachi, Pakistan.  Who is in Makkah, Saudi Arabia Grew up He is also said to be chairing a committee of Saudi expatriate Rohingyas.According to sources, Arsa leader Hafeez Ataullah alias Abu Ahmed Jununi, son of Rohingya Golam Sharif, along with his associates are currently staying at Naikhyangchhari Tumbru Zero Point in Bandarban.Leader Abu Ahmed Jununi and 4/5 members are on full-time armed guard.His other members are in Balukhali Camp 8/ E block.He visited Balukhali Rohingya Camp-8 twice.Arsa has also held separate meetings with armed groups.He is known in the Rohingya camps as a firebrand, a terrorist, a Yaba godfather and a human trafficker.Locals say that at present the members of the Arsa force have created panic among the local Bangladeshis including the Rohingya.Apart from the residents of Ukhiya and Teknaf, ordinary Rohingyas have also termed Arsa as a ‘militant force’. Locals say members of the so-called Arsa or al-Yakin are scattered in every Rohingya camp in Ukhiya and Teknaf.One of the reasons for the displacement of Rohingyas from Myanmar was the attack on the country’s army.  Al-Yakin’s armed group was also involved in the attack.Now they are trying to dominate the Rohingya refugee camps in Bangladesh as well.  There are also reports of drug trafficking, human trafficking, ransom after kidnappings, robberies, rapes, murders and the collection of firearms for drug money inside the Rohingya camps. Speaking to ordinary Rohingyas, it is learned that Arsa member Master Dil Mohammed, son of Master Ola Miah at Tambru Zero Point in Naikhyangchhari, Master Arfat Ahmed, Faizul Kabir  Maulavi Abu Anas, Arsa and Al-Yakin’s second-in-command  Son of Hossain Ali at Camp-8.This Maulavi is close to Abu Anas, Arsa or Al Yakin have all the weapons in stock. Maulavi Hamidullah, son of Golam Quader in Camp-6-E Block-B34, tortured women in the camp, raped various helpless women at gunpoint and served as Arsa commander.  Camp-8-E Block-240, DRS Team Leader and Faizul Kabir’s son Md Ayash.He Al-Yakin has been in charge of all information sharing and acting as commander. 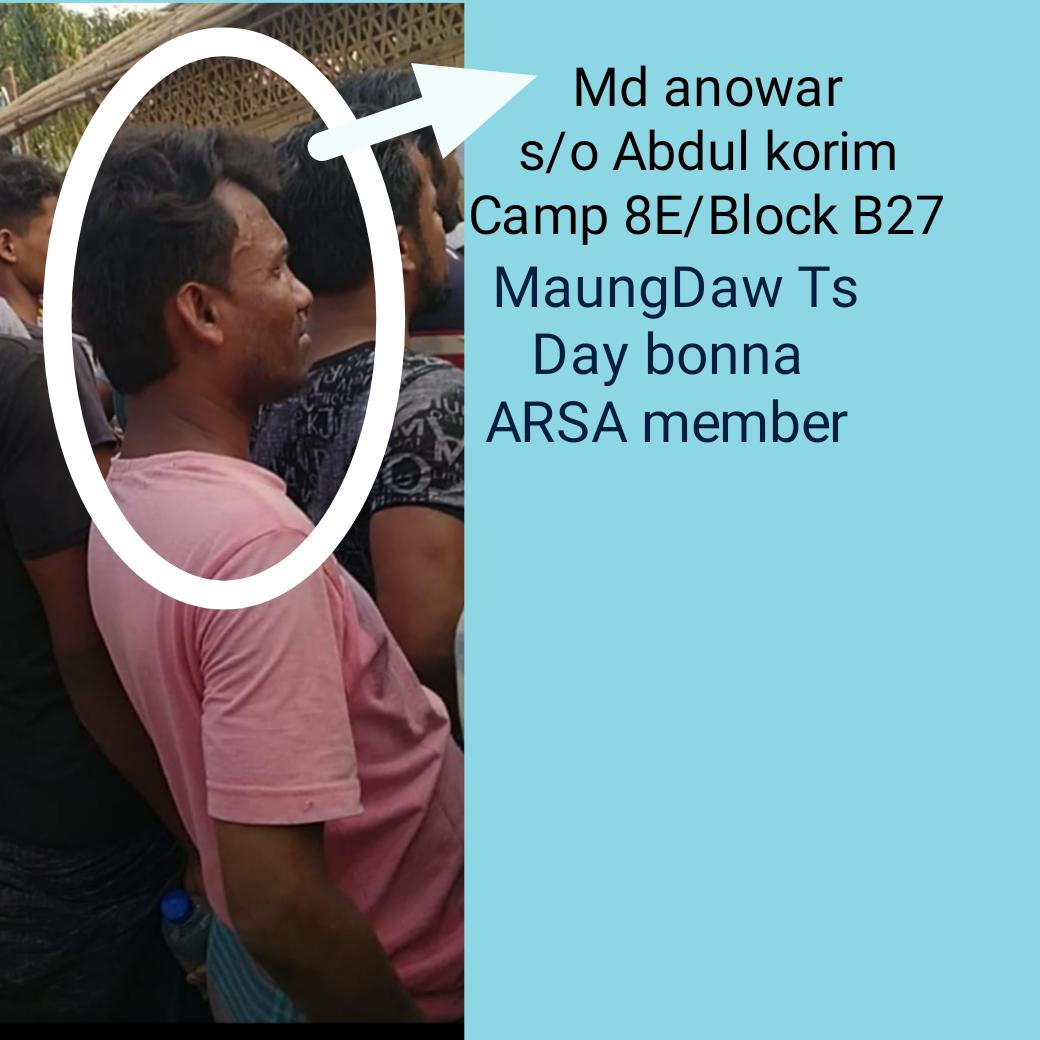 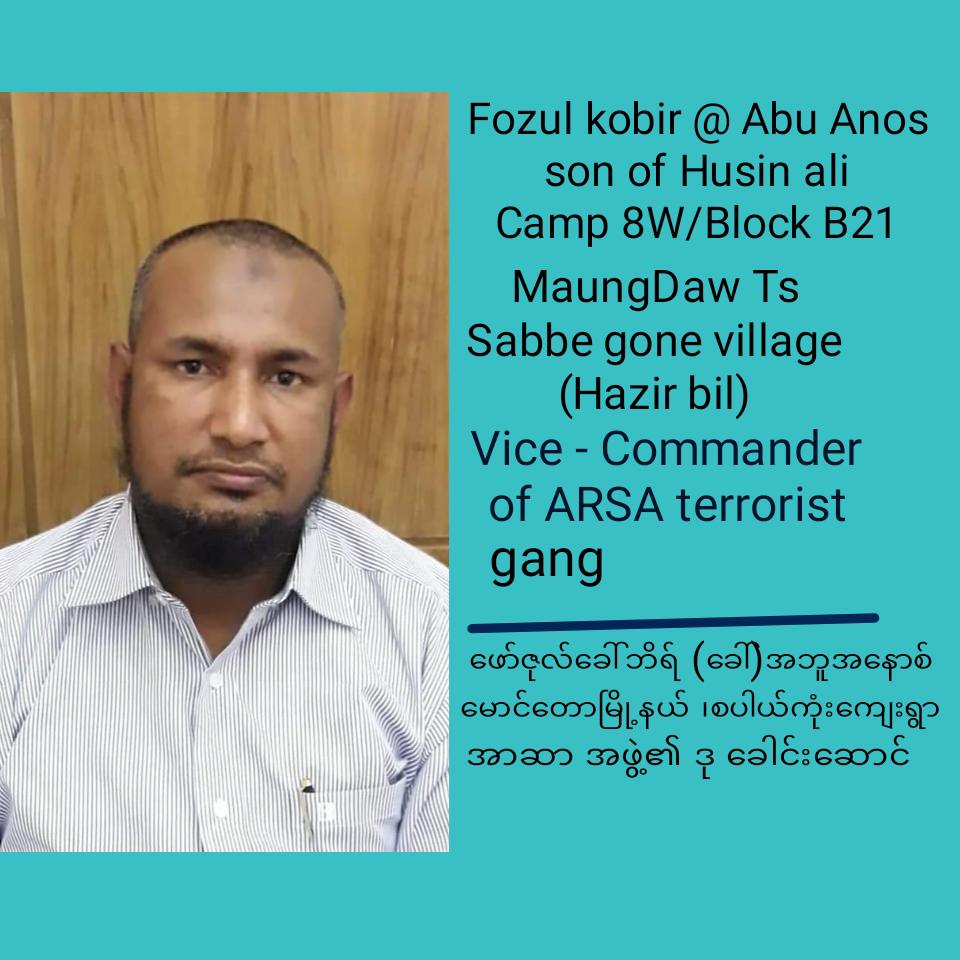 Yasin Majhi, son of Hafeez Ismail, a resident of Block B-50, Camp-8.  He is the head boatman and chairman of this block.The camp involved extortion from each family, the yaba business, and the sale of all al-Yakin weapons.Sirajul Islam alias Siru Majhi, son of Abu Ali of Block B-40, is a night guard for Al Yakin, a yaba trader and a detective for Al Yakin. Ordinary Rohingyas also said, Balukhali Camp 6-E, Block-HB-37 Head Majhi Md.Siddique’s son Yaba Godfather.Shafiq alias Md.Hossain.He is involved in all criminal activities, starting from threatening ordinary Rohingyas and is accused of shooting or injuring Rohingyas if they do not listen to him. According to the investigation, many camps including Ukhiya Kutupalong Rohingya Refugee Camp-3 and 6, Balukhali Camp-6 and 8-East 9 and 10, Thaingkhali Jamtali Camp-15, Camp-21 are roaming around many places day and night.  However, there is a worrying trend in Balukhali Camp-8.  According to ordinary Rohingyas, Ukhiya Balukhali can easily enter Camp-8, 9 and 11 from Zero Point on the Myanmar border and is convenient for travel.  Large consignments of yaba, ice and gold bars can also be smuggled into Myanmar through smuggling routes.It has been alleged for a long time that Arsa Group is creating various misdeeds to control these businesses and domination. According to the investigation, the armed group used to cross the border into Myanmar at night in a place called Zoom Chhara in Balukhali, football field in Balukhali and Maragach Tala to enter the drug and smuggling camp.As a result, the locals also live in fear. According to the Rohingyas, the drug trade, extortion, ransom trade, and domination have led to many killings in the last four years.  Naturally, the question arises, where is so much weapons and ammunition coming from the Rohingya mountain camps? It is also a sophisticated weapon!  Who is the supplier of their weapons? Al-Yakin terrorists also handed over weapons to Rohingya women.They are being trained to wield weapons. Armed Rohingyas armed with foreign firearms are also campaigning with pictures to assert their (male and female) existence through social media. Some Rohingyas, who did not want to be named, said that Arsa member Camp-15, Block-G-2 Maulavi Nurul Alam’s son Md.Noman, Dil Md and Maulavi Arafat Ahmed of Zero Point, his adjoining Ghumdhum on the Myanmar border in Bandarban, have maintained a close relationship with the law enforcement agencies as a local source.They are also one of the hotspots for zero point centric yaba, drugs and gold smuggling.All misdeeds go to zero point under their control.Camp-3 block-A, A 3 / 31, Shed boatman Md Siddique, Hafeez Md, son of Abdur Rahim of Nur Md block.Alam is an active member of Yasin Arsa, Head Majhi of Camp-8. Yasin was arrested with a weapon and is currently in jail.But members of his alleged group are known to be carrying out various criminal activities.The Arsa members in the camp are also raising large sums of money to release Yasin on bail with the money earned from the business of smuggling yaba, drugs and gold and secretly extorting money from ordinary Rohingyas. Several Rohingyas in the Balukhali camp, who did not want to be named, said most of the people in the camp wanted peace.They move according to the instructions of the law enforcement agencies of Bangladesh.However, a number of terrorist groups, including Arsa or al-Yakin, are causing unrest in the camps.Not only Bangladeshis, but also Rohingyas are being tortured more by them.The horrific fires that broke out in various camps, including Balukhali in Ukhiya, were the work of Arsa or al-Yakin.The Rohingyas allege that they set fire to the houses of the Rohingyas due to the spread of domination.
Locals and Rohingyas said Arsa dominated several blocks of the Balukhali Rohingya refugee camp.Among them, the group roaming in Balukhali Camp-8E block has the most powerful and heavy weapons in their hands.  Concerns are growing over the rise of Rohingya terrorists with Arsa identities. Many Rohingyas, who did not want to be named for security reasons, said, “We have heard that there are now members of Arsa or Al-Yakin in every Rohingya camp.”No one dares to open their mouth against these irregularities”.Because if they protest, armed groups will come and take them away in the dark of night, the fear of beating is working among ordinary Rohingyas.Many women have been raped by them in the last few months.  They have been treated by a village doctor.All of them said that Arsa members had defeated them. According to the Rohingyas, there is not much movement of law enforcers inside the camp.In this opportunity Arsa gets a chance to do whatever he wants. 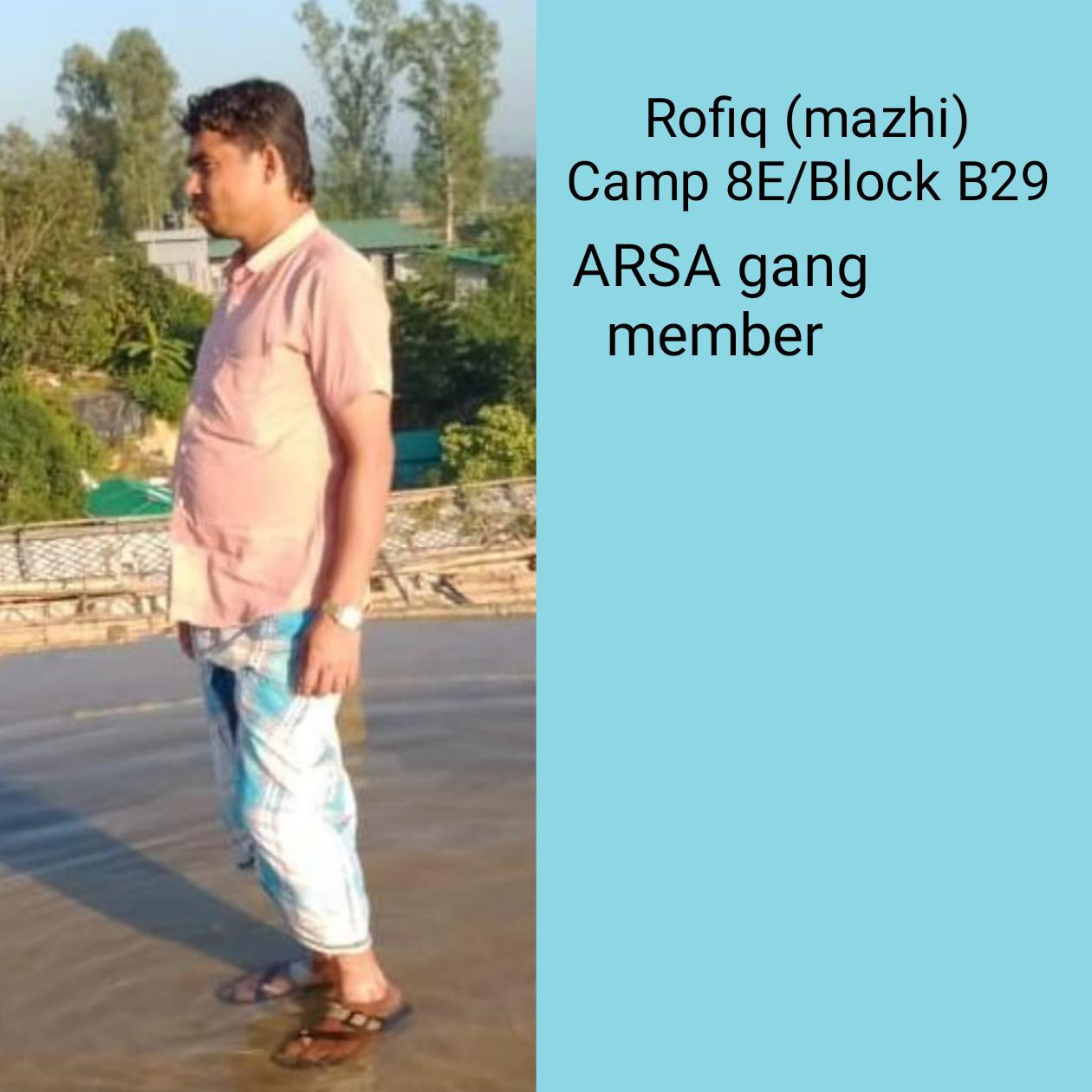 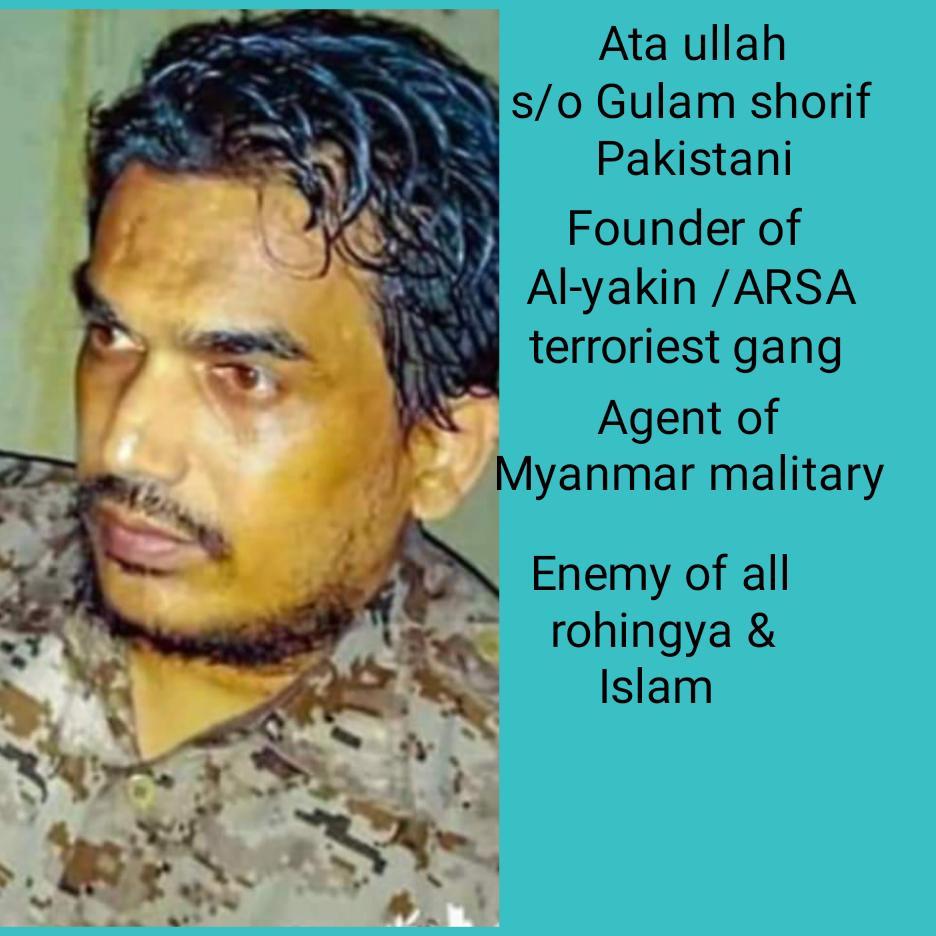 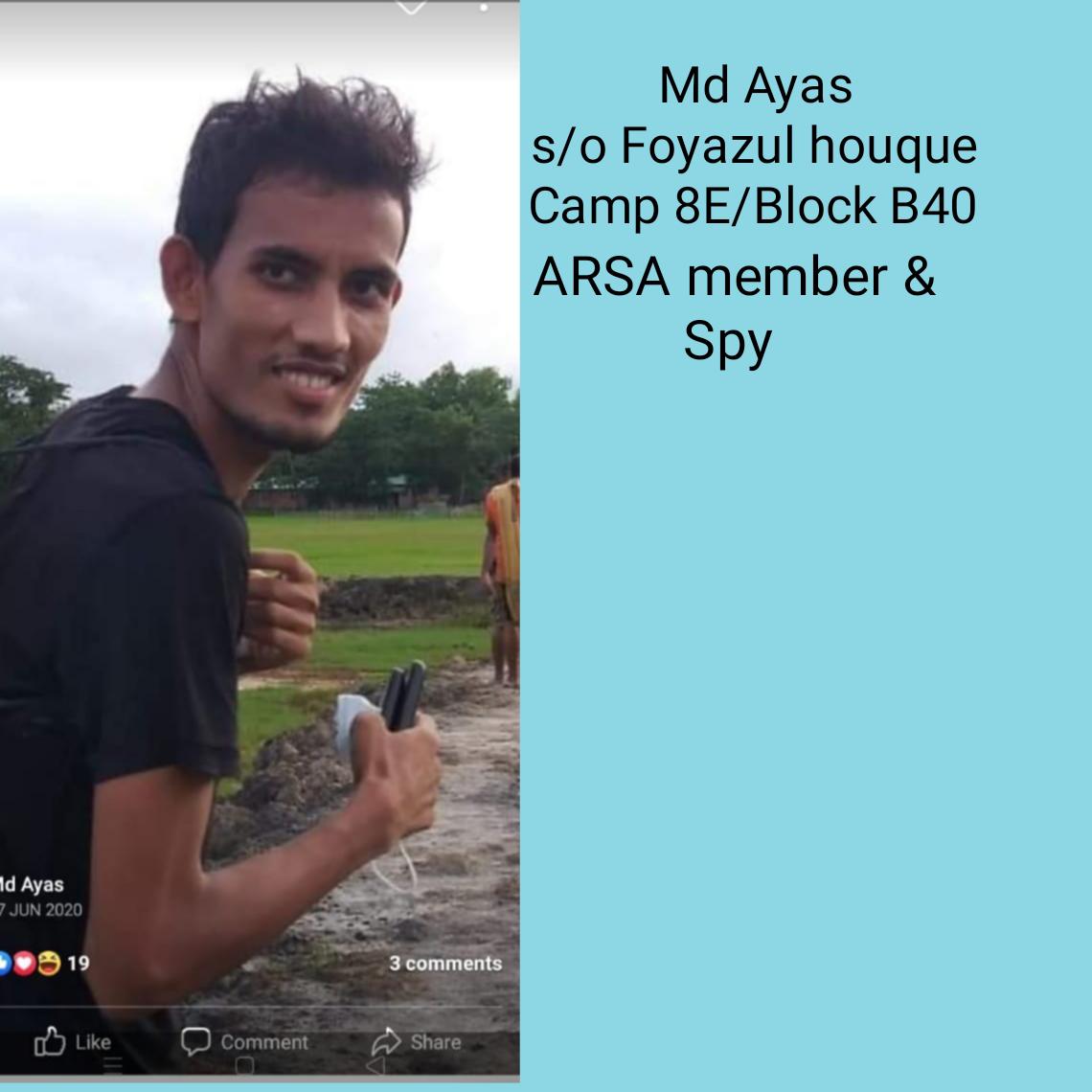 Many Rohingya women who were raped by Arsa members and later became pregnant have sought treatment from village doctors and had abortions. An unnamed village doctor said this. The panic among the ordinary Rohingyas in the camps over the harassment of Arsar.  There is a fear in everyone’s mind that armed Arsa terrorists could happen at any time. A member of an intelligence agency in charge of the Rohingya camp said many of the men were listed as terrorists.There is a lot of information about them. 8 Armed Police Battalion (APBN) Additional Superintendent of Police engaged in maintaining law and order in the Rohingya camp.Kamran said, the terrorists sheltered in the camp were listed by the police.  No group will be allowed to carry out terrorist activities in the camp.  Those who try to engage in terrorist activities will be investigated and action will be taken.
14 Armed Police Battalion (APBN) Captain SP Naimul Haque told PPM that no group could be present in the Rohingya refugee camps.  APBN members raided the camp at different times and arrested about 900 Rohingya miscreants involved in various crimes, including 220 alleged Arsa members, and legal action was taken against them. 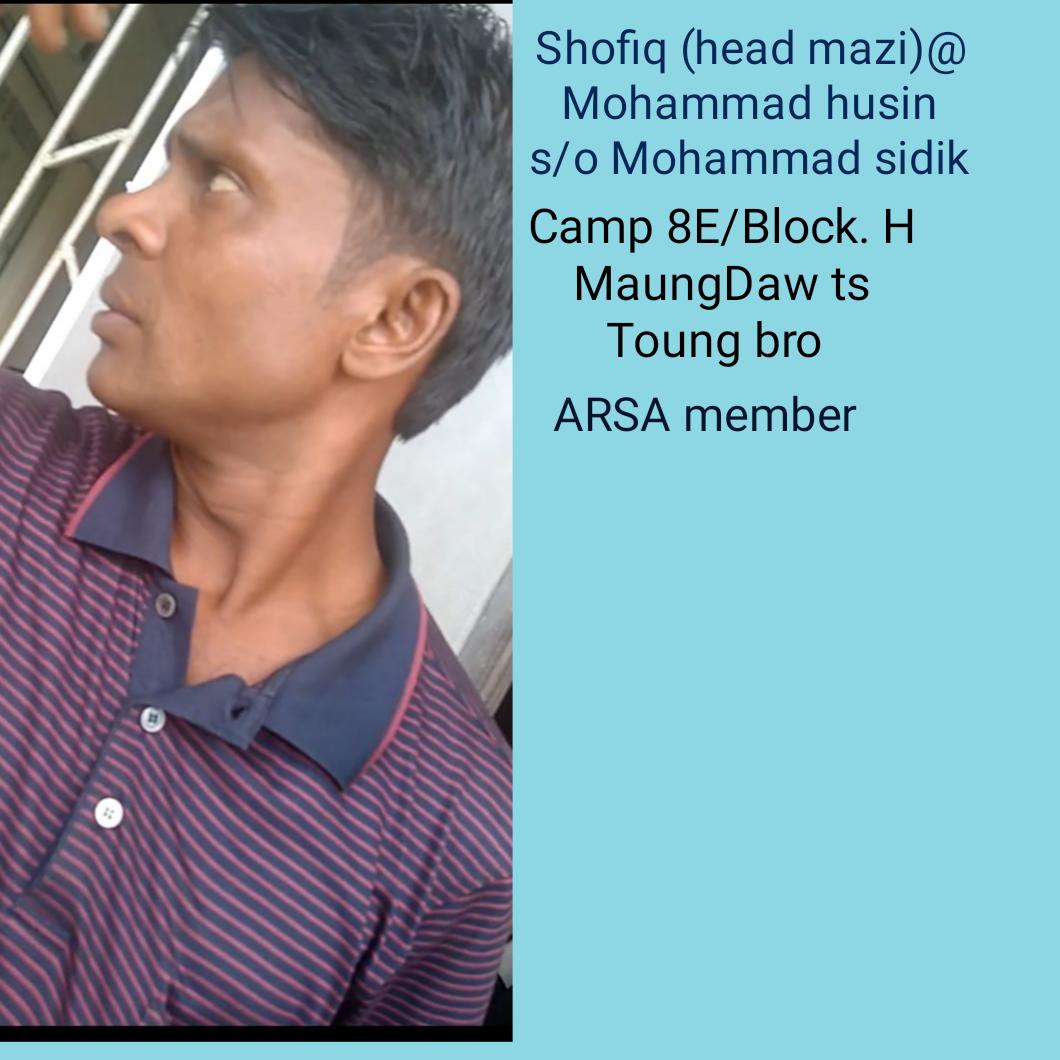 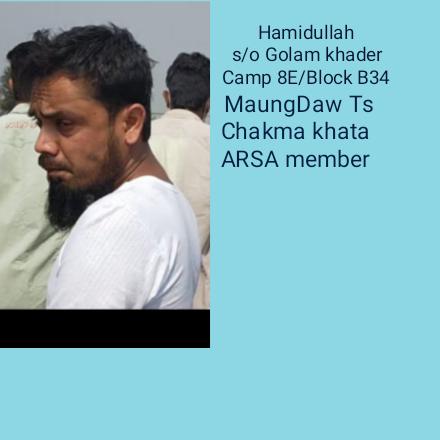 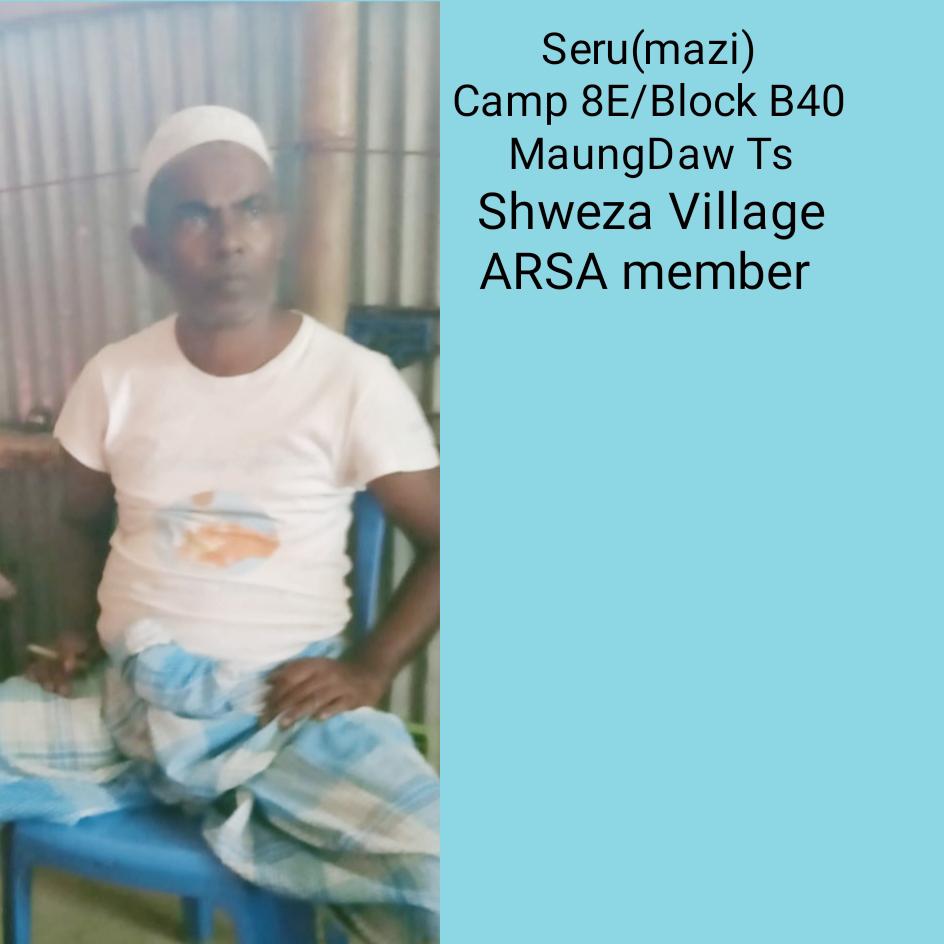