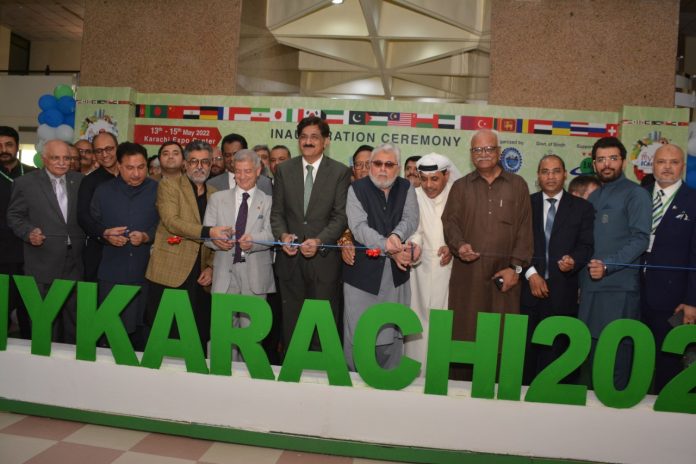 KARACHI: (By: Aleem Nawab Khan) While referring to last night’s blast in which a 24-year old boy was killed and 10 others were injured, Chief Minister Sindh Syed Murad Ali Shah vowed that the Sindh government would not let the bad times return to Karachi and would track down terrorists in every single area of Karachi to completely eliminate them.

“Even a single murder in the province is unacceptable and cannot be tolerated. I strongly believe that terrorists have no religion or language. They aren’t Pakistanis or even humans”, he added while speaking at the inauguration ceremony of 17th My Karachi – Oasis of Harmony Exhibition here at the Karachi Expo Center on Friday,

Chief Minister Sindh further stated that after 2013 when the city was ranked on 7th position as the most dangerous cities of the world, peace and stability had returned to Karachi and the city was on a better place in the crime index. The entire nation collectively fought against terrorism.

While praising the leadership of Businessmen Group and paying glowing tribute to Late Siraj Kassam Teli for his commendable contribution, Murad Ali Shah also appreciated all the exhibitors, diplomats and other participants, saying that the exhibition will certainly prove to be fruitful as Karachi is a vibrant city with tremendous potential. “Today’s House full at the Expo Center and the presence of so many diplomats clearly indicates that they all believe in the people of Pakistan and the resilience of the people of Pakistan.”

CM said, “I know a lot of people won’t agree with me but I am saying this from the bottom of my heart that Karachi, which contributes 70 percent to the national exchequer, has the potential to even contribute 90 percent. We want remaining Sindh and Pakistan to develop as well and pay taxes. I belong to Sehwan and would like to see Sehwan developing to such an extent that it also contributes 70 percent revenue”.

Chairman BMG Zubair Motiwala, in his remarks, said that despite serious blast last night, today’s house full at the Expo Center with Chief Minister’s, provincial ministers’ and diplomats’ presence at My Karachi exhibition shows the resilience of the city’s business community. “Karachi will continue to exhibit resilience and we will never succumb to what the terrorists and other anti-state elements have been doing”, he said and requested the diplomats to convey this message of resilience and also the city’s potential displayed at the exhibition to their respective countries.

While paying glowing tribute to Late Siraj Teli for his matchless services not only to the business community but also to Karachiites, he said that the Karachi Chamber and all the BMGIANs were following the footsteps of Siraj Teli who will always be remembered for his bravery and contribution.

He pointed out that Karachi with a population of just 10 percent of country’s population contributes more than 54 percent in terms of exports but this share would go down as some people don’t want to see speedy growth in Karachi hence, energy crises have been triggered and there was no gas available to industries since Monday while RLNG was also not being provided which was highly unfair and not making any sense.

Appreciating the exhibitors for setting up stalls in a challenging environment wherein Expo Center’s ACs were hardly functional and there was no electricity last night, he stressed that Expo Center needs to improved and expanded as this was the place where the business community dedicatedly promotes Pakistani made products and services. “The industrial zones of Karachi also need government’s attention as these zones were in a really bad shape”, he added.

To resolve the issues being faced by the business community, Chairman BMG requested the Chief Minister to regularly hold meetings with KCCI’s delegation even for an hour so that the issues could be brought to CM’s notice and promptly resolved. He also appreciated Chairman PPP Bilawal Bhutto for holding a meeting with the business community of Karachi, listening to their problems and assuring to get them resolved.

President KCCI Muhammad Idrees, while welcoming the Chief Minister and other esteemed guest at My Karachi Exhibition, stated that since its inception 2004, My Karachi kept improving every year and it was a challenging task to stage this huge show in just three available halls but all-out efforts were made to accommodate as many stalls as possible. “A total of more than 250 stalls have been established in all three halls and outer area of the expo center”, he informed and appreciated all the exhibitors for regularly participating and supporting this major event.

“The presence of large number of diplomats along with provincial ministers and exhibitors in today’s inauguration ceremony is the testimony of exhibition’s success”, he said, adding that the revenue generation from this exhibition has enhanced from just Rs2 million in 2014 to Rs.35 million in 2022.

Expressing deep concerns over the pathic condition of Karachi Expo Center, Muhammad Idrees requested the Chief Minister Sindh to arrange a meeting with Commerce Minister Naveed Qamar at the earliest possible time so that this particular issue along with other serious issues being faced by the business community of Karachi could be discussed at length.

He said that although everyone appreciates the contribution being made by Karachi but when it comes to returning something to this great city, none of the previous governments came forward to do something good for this city whose infrastructure was in a dreadful state. The federal and the provincial governments must give special attention to the infrastructure issue of Karachi.