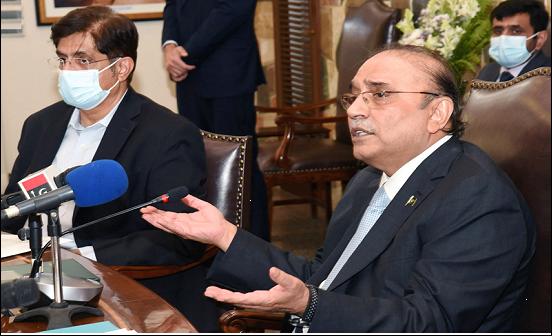 KARACHI: Former president and PPP Co-chairman Asif Ali Zardari said Wednesday that Pakistan would move towards the general elections only after the government introduces electoral reforms. “Electoral and NAB (National Accountability Bureau) reforms are included in our game plan,” the ex-president said during a press conference, noting that if polls are held before reforms, then any government that comes into power will face the issues that the past and present regimes are facing. Electoral reforms will take three to four months, he said, adding that the government will not go for elections without them. “We do not want any selected person to come into power again”, Zardari said, adding that he has persuaded PML-N supremo Nawaz Sharif over the electoral reforms ahead of the elections. He said the government will take all the coalition parties on board ahead of making decisions. The PPP co-chairman said that the Opposition is now calling for elections after the coalition parties formed a government. “We did not refuse to hold elections. We will hold elections after electoral reforms,” he added. “No one used to listen to me when I would stress holding fresh elections when this selected [PTI-led government] came into power,” said Zardari, adding that the coalition parties have removed the selected government after working together. Berating the former prime minister, the PPP co-chairman asked: “What will PTI Chairman Imran Khan do by holding the elections soon.

What has he done in the last four years for the nation?” “People in Islamabad have a mindset that no one gets the votes in Sindh except PPP,” said Zardari, adding that Khan should contest the elections in Sindh and see how many votes he gets.  He further said that Khan has misled overseas Pakistanis through his rhetoric. “They [overseas Pakistanis] do not know the ground realities here,” he added.  The ex-president and PPP co-chairman also called for “out of the box” solutions to fix Pakistan’s economy as the country faces an uphill task on the fiscal front. The PPP co-chairman maintained that the new government would take some time to control the situation. Zardari said that the nation would have to face problems until the coalition government finalises the programme with the International Monetary Fund (IMF). He said that the government removed the selected PTI-led government from power with the help of political power. “We did not take any votes from the PTI’s dissident lawmakers,” he said, adding that he has come to power to know the prices of “aaloo, tamatar, unlike Khan.” The PPP leader went on to say that the government will have to find the solutions to all the problems the country is facing, adding that he wants to have talks with the traders’ community. He also criticised the former regime’s economic policies and said the incumbent government will have to make its own policies to put the country on the track to progress and prosperity.