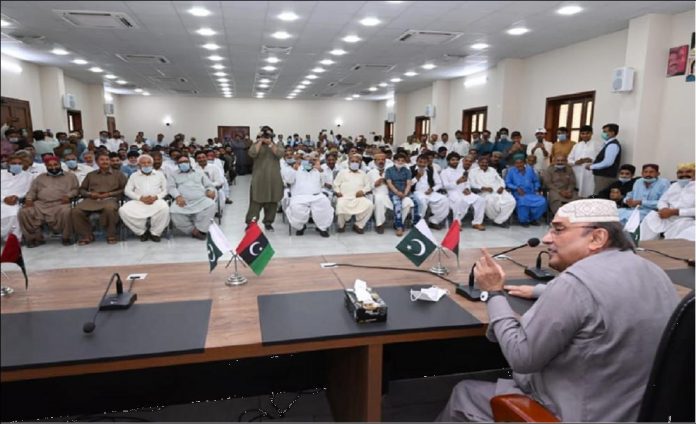 HYDERABAD/DADU: Former head of state Asif Ali Zardari has said that not he but Bilawal Bhutto Zardari could get the position held by [his grandfather] Zulfikar Ali Bhutto and mother Benazir Bhutto. “I cannot put my foot in the shoes of Bhuttos,” he remarked. He was addressing party workers in Bandhi town of Shaheed Benazirabad district where former town committee chairman Muzaffar Hussain Jamali and former nazim Mumtaz Ali Jamali hosted a dinner in his honour on Tuesday (Eid day). “PPP moo wat Bibi Sahiba ji amanat aahay (PPP is trust of Bibi Sahiba which I have kept with me),” he said in his brief speech. He said he was not worth putting his foot in the shoes of Bhutto Sahib and Bibi Sahiba. “But Bilawal Bhutto can achieve that position [of Bhuttos],” he added. Mr Zardari, who is co-chairman of Pakistan Peoples Party (PPP), said “conflict is big and as such my efforts are also big”. He did not explain what kind of conflict he is alluding to. “The war is between tyrant and victim …they keep coming up with new faces; sometime in the shape of Gen Musharraf and sometime in the shape of Gen Zia. Now it is Imran Khan,” he said. He said he had told Imran Khan he would not be spared; “and see he has been ousted though for his own follies”. “Z. A. Bhutto preferred gallows and left a learning for all of us,” he remarked. He said that he had faced Pakistan’s courts. “My people and workers are my court. You have always voted for me and Bibi,” he told the audience. In a lighter vein, he smilingly stated: “I always say that workers be allowed to meet me otherwise they will throw tomatoes at me when I will approach them for vote next time”. He promised jobs for youths and said that workers should pray for him regardless of the fact that they were offering prayers or not. “Your prayers benefit me, and I will serve workers,” he said. He also announced construction of a railway bridge for the people of Bandhi and Shahzado Dahiri link road. Provincial ministers including Jam Khan Shoro, Sharjeel Memon, Nasir Shah and others were also present. Speaking at another gathering of workers in Zardari House, Asif Zardari said that PPP and its allies would soon form their governments in Balochistan and Khyber Pakhtunkhwa as well. “We have achieved success, but it’s half, the other half will be achieved when we will form our governments in Balochistan and KPK,” he said. He expressed his confidence that “PPP will form its governments in Punjab and KPK”. Leaders and senior activists of PPP’s Shaheed Benazirabad district as well as notables from different districts including Naushahero Feroze and Sanghar met the PPP co-chairman to exchange Eid greetings. He said Pakistan had seen a sustained struggle by journalists for press freedom. Benazir Bhutto, he added, had lifted a longstanding ban on media coverage in 1988. “Freedom of expression is the yardstick to measure democracy,” he remarked. He said he saluted all those who had endured hardships, incarceration and even flogging in the struggle for independent journalism. He said PPP would always defend freedom of press and expression. Speaking at a reception hosted for him in Karnal Goth, Nawabshah, on Thursday by Shoaib Arain and Qurban Ali Arain, Asif Ali Zardari said he would ensure economic prosperity of the country so that poor could become rich. He said it would not lead the country to prosperity if rich got richer. He said he has accomplished one task so far and several other tasks still remained unaccomplished, adding that politicians had always talked about Pakistan’s prosperity. “It is not Pakistan’s destiny that we should remain poor. I will make this country prosperous. Poor will become rich. A country progresses if poor become rich and not if rich become richer,” he remarked. The PPP co-chairman said that Z. A. Bhutto and Benazir Bhutto stood tall due to their character. He said that he always cherished his love with masses and masses’ love with him. He said that he and his family were beholden to people of Nawabshah. He said that people got him and his father elected to the National Assembly from here. He said that every individual of Nawabshah could claim a right on him and PPP. He said he was born in Nawabshah and accustomed to the city’s heat. He announced a project for the construction of a bypass in the city and provision of gas to the area.