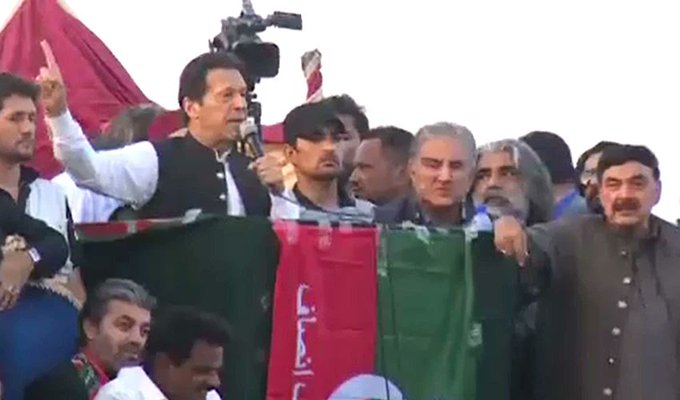 ISLAMABAD: Former prime minister and PTI Chairman Imran Khan on Friday told his party’s workers to remain prepared for the long march to Islamabad, saying he would announce the final date any day after May 20. Addressing a gathering in his hometown, Mianwali, he said a sea of people would reach the capital to demand only one thing – elections. “Let people decide who will rule us. We will not accept any imported government.” Imran told his workers that neither containers placed on the route could stop them from their march nor Interior Minister Rana Sanaullah, who he claimed had committed “18 murders”.He vowed that the nation would not bow before anyone as long as he was alive. The PTI chairman is conducting a whirlwind series of rallies, starting from today to May 20. According to a tweet by party leader Azhar Mashwani, the next rally will take place in Jhelum on May 10, followed by Attock on May 12, Sialkot on May 14, Faisalabad on May 15 and Chakwal on May 19. Referring to his former aide Shahbaz Gill’s recent accident, Imran, during his address today, said he was warning the government that if it touched any PTI worker in the future, he would hold “three stooges and their handlers” responsible. Addressing the loudly cheering crowd, Imran said he had not seen such a huge rally previously. Talking about his government’s achievements, he said it had reduced the current account deficit for the first time in 11 years, adding that Pakistan was among a few countries which protected their people from the ramifications of the coronavirus pandemic. In addition, there were record remittances and crops, he said. “[Prime Minister] Shehbaz Sharif, you lodged a false FIR against me, and jailed [MNA] Rashid Shafique [in connection with the Madina incident]. Our women and children will take part in the march in Islamabad. If you try to stop it or lodge a similar FIR, then you will be responsible for what will happen,” he warned. Since all party workers would not be able to reach the capital on the day of the long march, they should instead protest in Mianwali, he said. “I am calling my sisters, brothers, youth and mothers to the capital because this is the matter of Pakistan. I want everyone of you to come to Islamabad to tell this boot-polisher that slavery and imported government is unacceptable and [demand that he] hold elections.” He said it was the nation that would decide who would form the government instead of the US. The PTI’s Punjab government was toppled through bribery, he claimed, adding that the then-opposition should be ashamed of paying people to switch loyalties. He also asked the judiciary why it had not taken suo motu action over the events.