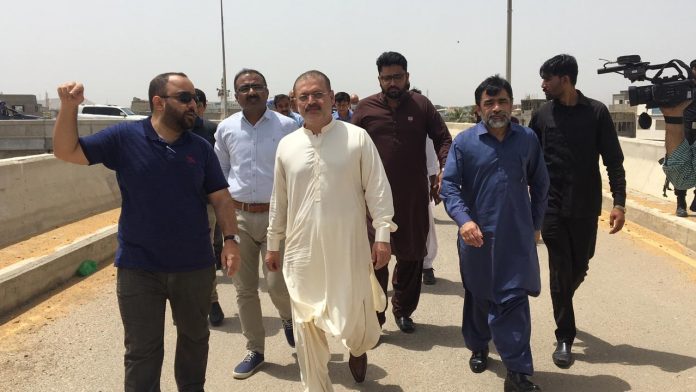 Karachi : Provincial Minister for Information, Transport and Mass Transit Sharjeel Inam Memon has said that all BRT projects of Karachi would be completed on war footing to resolve the long standing transportation issue of the cosmopolitan city. He added that Sindh Mass Transit Authority has been directed to setup camp office at the depot of Abdul Sattar Edhi (orange line) and work 24 seven to complete it’s remaining work by 30 May,positively.The Minister said this while talking to media on the occasion of his visit to BRT Orange Line on Saturday. He said that officers of Sindh Mass Transit Authority have been directed to bring their suit cases and cloths here at camp office at BRT Depot to monitor the pace of work work round the clock. He said he would himself visit the project thrice a week to review it’s progress.
He said that chairman Bilwal Bhutto Zardari, President Asif Ali Zardari and Chief Minister Sindh Syed Murad Ali Shah have given special instructions to resolve the long standing issue of mass transit of Karachi. He said that PPP has taken lot of steps to resolve it and solve the transport situation in our metropolis. Former Provincial Ministers of Transport Syed Nasir Hussain Shah and Syed Owais Shah took commendable efforts in this regard. He added that our leadership has directed to complete the work of years in months and those of months in days,he added and said that Sindh government will provide all possible assistance and full security to the BRT orange line contractors . He said that completion of all BRT projects of Karachi is top mission of PPP’s Sindh government adding that he has held long meeting on BRT projects with Sindh Mass Transit Authority official the other day and today visiting the it’s site to review and witness physical progress of the project. He also informed that meeting on BRT Red line has also been convened on comming Wednesday.
He informed that Abdul Sattar Edhi (orange line) is people’s project as Sindh government delievering a gift to the city of Karachi in a month time.
He said that BRT orange line has been named after Abdul Sattar Edhi, which is about four kilometers long from Orangi Town to Nazimabad Board Office where it will connect to the Green Line. It’s 98 percent work has been completed and this is entirely a project of Sindh government, which is being fully funded by Sindh government with a cost of Rs 4.290 billion. The project is being implemented by Sindh Infrastructure Development Company Limited, a federal government owned company, while Nespak is serving as a consultant in the project. He added that 20 buses of Orange Line project are arriving at Karachi port on May 11. After which the necessary operation of the port will be completed in few days to reach BRT depot. He said that one week time period has been fixed for test trials of buses on BRT. Responding to a question, he said that In response to a question, he said that Imran Khan is in state of mourning adding the person who remain in state of mourning loses it’s consciousness. Mega corruption scandals to surface against Imran Khan that’s why he (Imran) is trying to spread chaos in the country to divert attention of general public. He added that ousted Imran Niazi’s regime have left huge economic crises which could lead to major challenges for country, if not corrected. He said that arrogance nature of Imran Khan caused irreparable damage to country. He said that present coalition government is trying hard to over come the situation and steer the country out of economic challenges. The Minister advised Imran Khan to apologize nation for his mistakes and mismanagement of country’s affairs and try to correct his mistakes and prepare for next general election. He said that Imran Khan has given dangerous advice to his workers to tak…