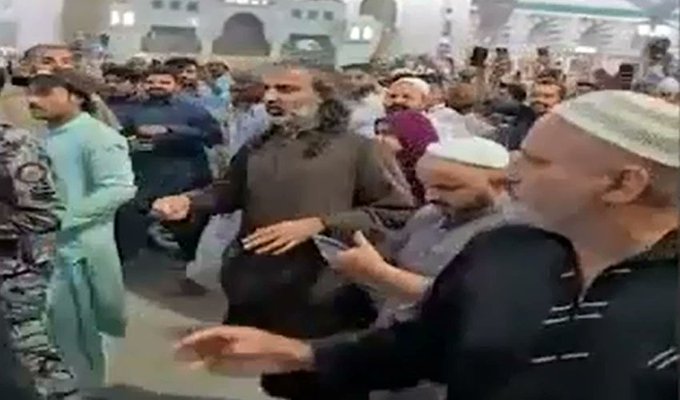 MADINAH/KARACHI: At least five Pakistani nationals were arrested for “abusing and insulting” Information Minister Marriyum Aurangzeb and Minister for Narcotics Control Shahzain Bugti at the Masjid-e-Nabawi (PBUH) in Madinah, confirmed the Saudi publication Saudi Gazette. The publication said that the spokesperson of the Madinah Police has said that the suspects have been “referred to the competent authorities after legal procedures were completed against them”. “Their actions contradict the sanctity of the place and impact the safety of visitors and worshipers,” said the spokesperson.  On Thursday some protesters, allegedly belonging to the PTI, violated the sanctity of the Masjid-e-Nabawi (PBUH) in Madinah on Thursday by loudly chanting slogans against member of Prime Minister Shehbaz Sharif and his delegation. Earlier today, Director of information at the Saudia Arabia Embassy in Islamabad, had confirmed that some Pakistani nationals have been arrested for violating the sanctity of the Masjid-e-Nabawi and an investigation has been launched into the matter.  The official further added that the individuals were arrested after they violated the rules of the mosque.  At the time the Saudi official did not confirm the number of people that were arrested.  PM Shehbaz and his delegation had reached Saudi Arabia on Thursday for a three-day official visit at the invitation of Saudi Crown Prince Mohammad bin Salman bin Abdulaziz. Foreign Minister Bilawal Bhutto-Zardari, Defence Minister Khawaja Asif, Finance Minister Miftah Ismail, Information Minister Marriyum Aurangzeb, Shahzain Bugti, Mohsin Dawar, Khalid Maqbool Siddiqi, Chaudhry Salik, and four members of PM Shehbaz Sharif’s staff are accompanying the prime minister on his visit. But as Marriyum Aurangzeb and Shahzain Bugti arrived at the mosque, the protesters started chanting slogans of “chor, chor (thieves)” when they saw theme premier and harassed and raised objectionable slogans. The protesters had also misbehaved with the JWP chief Shahzain Bugti and pulled his hair. The protesters continued to film the entire episode with their mobile phones. Commenting on the incident, Bugti said, “I respect Makkah and Medinah a lot and no one can speak in a loud voice there. Those who have passed derogatory remarks against Marriyum are still here, therefore, the news related to their arrest is fake”.Reacting to the unfortunate incident, Aurangzeb — without using Imran Khan’s name but in an apparent reference to him, said: “I don’t want to name the person responsible for this incident because I don’t want to use this holy land for political purposes.