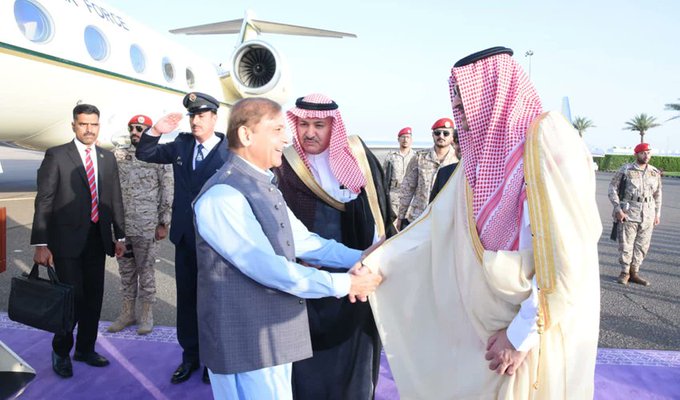 ISLAMABAD: Prime Minister Shehbaz Sharif Thursday arrived in Saudi Arabia — for his three-day visit — at the invitation of Saudi Crown Prince Mohammad bin Salman bin Abdulaziz. Foreign Minister Bilawal Bhutto-Zardari, Defence Minister Khawaja Asif, Finance Minister Miftah Ismail, Information Minister Marriyum Aurangzeb, Shahzain Bugti, Mohsin Dawar, Khalid Maqbool Siddiqi, Chaudhry Salik, and four members of PM Shehbaz Sharif’s personal staff are accompanying the prime minister on his visit. Governor Madinah Faisal bin Salman Al Saud and high-level Saudi officials received the prime minister after he touched down in the kingdom. The prime minister held a brief meeting with Madinah’s governor, where both the leaders exchanged views on bilateral relations. Taking to Twitter before leaving for Saudi Arabia, PM Shehbaz said that his visit will “renew and reaffirm” ties between the two countries. He added that he will hold wide-ranging discussions with the Saudi leadership. Briefing on the visit, Foreign Office spokesperson Asim Iftikhar, in a statement, had said that the prime minister will be in the kingdom from April 28-30. During the visit, the prime minister will have bilateral interaction with the Saudi leadership, with a particular focus on advancing economic, trade and investment ties, and creating greater opportunities for the Pakistani workforce in Saudi Arabia, the spokesperson said “The two sides will also exchange views on a range of regional and international issues of mutual interest,” the spokesperson said.