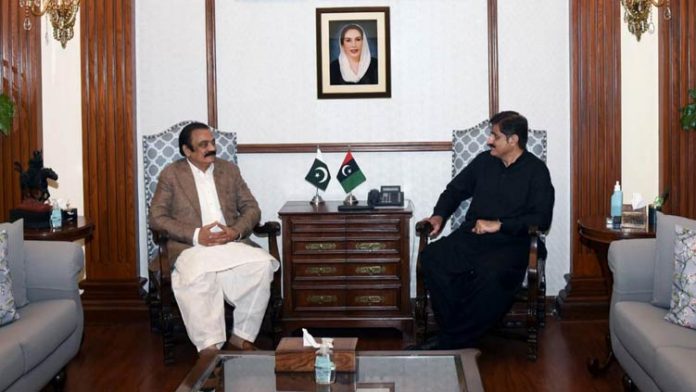 KARACHI : Minister for Interior Rana Sanaullah has said that security of foreigners will be ensured and terrorists will be completely eliminated. The federal minister paid an emergency visit to Karachi day after the suicide bombing which led to the killing of Chinese teachers at Karachi University. During the visit, Rana Sanaullah had a special and detailed meeting with Sindh Chief Minister Syed Murad Ali Shah at the CM House. During the meeting, the Sindh Chief Minister said that it was an unfortunate incident in which teachers were targeted and we have to improve our security. The interior minister said that we have to work together to rid the country of this kind of terrorism. After the meeting, the federal minister also presided over a special meeting at the Chief Minister House, which was attended by Sindh CM Murad Ali Shah and other senior and relevant officials. It was informed in the meeting that it was a suicide blast which led to the killing of four persons including three Chinese national and 3 kg ball bearing was used in the blast. The meeting was also informed that shortly after the blast, BLA Majeed Brigadier accepted responsibility through social media. Rana Sanaullah was also briefed about the attacker and was told that the female suicide bomber had arrived in Karachi on March 20. The investigation has revealed some more suspicious vehicles. Addressing a press conference along with the Sindh Chief Minister, the Interior Minister said that the briefing of IG police was also encouraging. He also commented on her husband s arrest. Rana Sanaullah and Sindh Chief Minister also met the family members of the van driver killed in the blast and offered condolences. He announced Rs 10 million compensation from Prime Minister Shehbaz Sharif and Rs 1 million from Sindh Chief Minister for the affected family. Earlier, the federal minister, Sindh Chief Minister and Administrator Karachi also visited the Chinese Consulate where they met the Chinese Consul General and expressed regret over the incident.