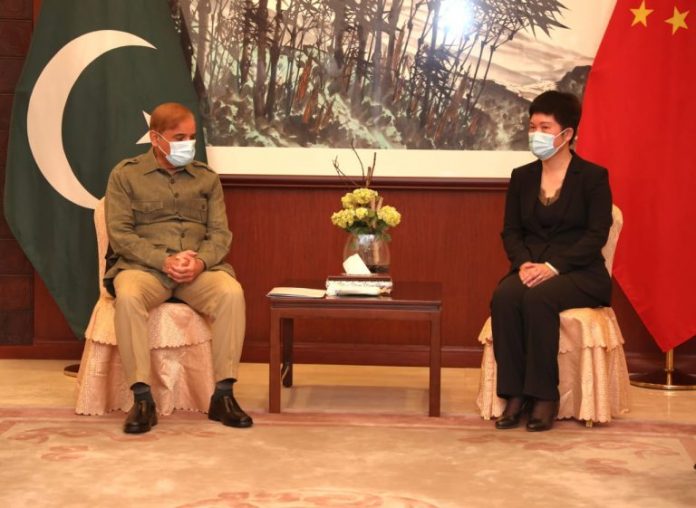 ISLAMABAD: Prime Minister Shehbaz Sharif assured China on Tuesday that his government will not rest until the criminals involved in the suicide attack on the Chinese nationals in Karachi are brought to justice. PM Shehbaz’s statement came when he met Chinese Chargé d’affaires Pang Chunxue at China’s embassy in Islamabad to condole with her over the death of her country’s citizens. During the visit, the premier also sent a special condolence message to Chinese President Xi Jinping. According to the PM Office, the premier expressed sorrow and grief over the death of Chinese residents in the suicide blast at Karachi University. “The entire Pakistani nation is in shock and grief over the brutal attack on its iron brother” said PM Shahbaz. He also extended heartfelt sympathies and condolences to the Chinese government, its people, and the families of the victims. “We condemn this terrorist attack in the strongest words and are determined to eradicate all forms of terrorism and terrorists from Pakistani soil,” assured the premier. PM Shehbaz told the Chinese diplomat that his government will “investigate the incident expeditiously” and sentence the culprits to “exemplary punishment”. He also added that he has directed Interior Minister Rana Sanullah to visit Karachi tomorrow. “We will not sit with ease till the criminals are arrested and punished and we will hang the culprits who took the life of the Chinese nationals,” said PM Shehbaz. The premier also shared that the Pakistani government would make all arrangements for the repatriation of the dead bodies and the injured to China. “I have ordered to provide foolproof security to the Chinese citizens and institutions,” said PM Shehbaz. The premier, during the visit, also wrote in the condolence book set up at the Embassy. PM Shehbaz was accompanied by Federal Ministers Ahsan Iqbal, Marriyum Aurangzeb, Rana Sanaullah, and State Minister Hina Rabbani Khar. Four people, including three Chinese nationals, were killed while four others sustained injuries in a car explosion on the premises of the University of Karachi. According to the Counter-Terrorism Department (CTD), it was a suicide blast and was carried out by a burqa-clad woman.  The explosion occurred at 1:52pm in a van near the Confucius Institute — a Chinese language teaching centre at Karachi University. Following the blast, rescue and security agencies rushed to the location and cordoned off the areas, initiating rescue operations. The deceased Chinese nationals have been identified as the director of the Confucius Institute Huang Guiping, Ding Mupeng, Chen Sai, and their Pakistani driver, Khalid. Police sources said the van entered the premises through the Maskan gate of the university, they said. Of the four people who sustained injuries, two have been identified as Chinese national Wang Yuqing and a security guard named Hamid. All of them are currently hospitalised and are receiving treatment. Meanwhile, the bodies of the deceased have been shifted to Karachi’s Jinnah Hospital for an autopsy.