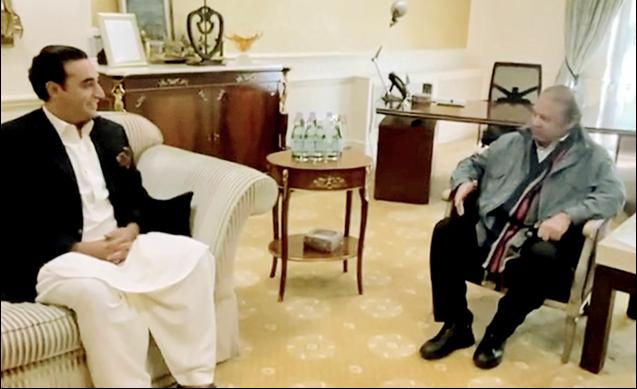 LONDON: PML-N supremo Nawaz Sharif berated ex-prime minister Imran Khan for backtracking on every promise and said the PTI chairman broke the back of Pakistan’s economy, so there was no reason for a foreign conspiracy against him. “Were you involved in holding an atomic blast? Why will there be a foreign conspiracy against you?” Nawaz asked ousted premier Khan as he addressed a press conference alongside PPP Chairman Bilawal Bhutto-Zardari in London. Nawaz — who was removed by the Supreme Court from the prime minister’s office in 2017 — said during the PML-N’s government, the country’s economy was moving in the right direction. “But now we will have to repair the damage done to the economy,” Nawaz said as he stressed that ousting Khan from power was crucial for the country’s development. He also claimed that there has never been such a hostile political environment in Pakistan as there was during PTI’s tenure.  “Khan promoted the culture of hooliganism and immorality.” Noting that there was an enormous challenge facing the new government, he called for joint efforts from all the parties to resolve Pakistan’s issues. “We need to work together as Pakistan saw the worst of times during the four years that Imran Khan was in power […] he took U-turns on everything and always did the opposite of what he vowed to,” Nawaz said. Taking a jibe at the PTI chairman, Nawaz said that Khan had claimed that he would take his own life before approaching the International .
Monetary Fund (IMF) for financial support. “But we did not see him take his own life till now,” he said. Concluding his bit, Nawaz thanked Bilawal for visiting him at the office and also informed journalists that they would hold another meeting tomorrow — but provided no details about it.