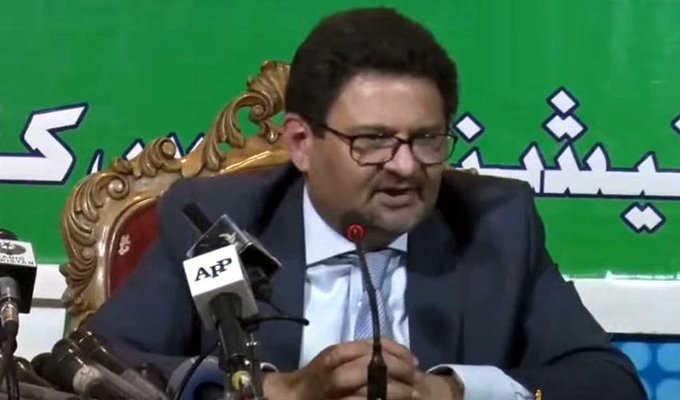 ISLAMABAD: Newly appointed Finance Minister Miftah Ismail said Wednesday that the subsidy allowed for petrol for the months of May and June would cost Rs96 billion, and the government cannot bear this burden. Speaking during “Meet the Press” at the National Press Club, the finance minister — accompanied by Federal Minister Information and Broadcasting, Marriyuam Aurangzeb — said PTI’s government had left landmines for the incumbent government. “…by not taking tax on petrol and diesel, Imran Khan has put the Shehbaz Sharif-led government in trouble […] making petrol cheap is not a favour, it is the nation’s money through which they give subsidy,” the finance minister. The finance minister said the government is giving a subsidy of Rs52 on diesel and Rs21 on petrol, and due to this, Rs68 were paid off from the national exchequer in terms of April’s subsidy. “This is double the cost of administrative expenses of our civilian government. We cannot keep this up. The prime minister will have to take a decision in this regard,” he added. Ismail said the coalition government would make all-out efforts to restore the Extended Fund Facility (EFF) programme with the International Monetary Fund (IMF). “We will restore the programme. If the government had to tighten its belt, it will do so,” he said, adding that no extra burden would be put on people.  The finance minister suggested that the government could reduce public sector development spending with other necessary budgetary discipline arrangements. He said the government would present a people-friendly and development-friendly budget despite all odds created by the PTI government. He expressed the hope that the value of the rupee would not slide further while the markets would also perform well. He said the PML-N had left growth rate at 6.1%, which was reduced to 1.9% in the first year of the PTI government, and negative one percent the following year. Likewise, he added, the Consumer Price Index (CPI) based inflation has gone up from 3.9% to 12.7% whereas the Sensitive Price Indicator has climbed up to 17.3% adding that the rural inflation has witnessed more hike than the urban one, which is unusual. He said PML-N left 2.3% food inflation which has gone up to 10% in the year and 14% in March. Similarly, the budget deficit during the five years of PML(N) tenure was recorded at Rs1,600 billion on average, however, during the current year, it has been recorded at Rs5,600 billion. The finance minister said the tax collection has also reduced from 11 .1% of GDP to 9.1%, whereas, the debt, which was Rs24,952.9 billion in the PML-N era, has now risen to Rs42,735 billion by December 2021. Ismail said that during its tenure, the PTI government took more than Rs20,000 billion in debt.