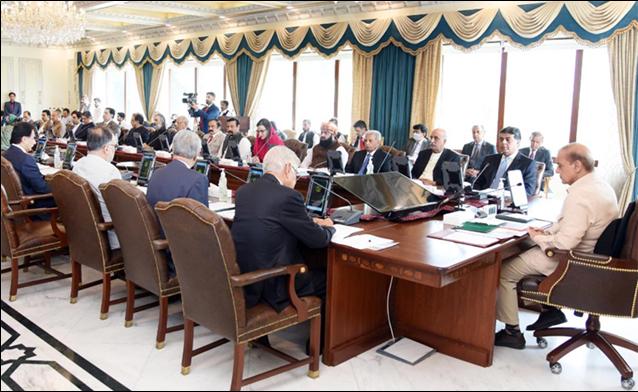 ISLAMABAD: Prime Minister Shehbaz Sharif Wednesday told his cabinet members to roll up their sleeves to meet the challenges of inflation, unemployment, poverty and load-shedding, for turning the desperation into an opportunity of progress and public relief. The prime minister, chairing the maiden meeting of his cabinet which took oath on Tuesday, believed that their dedicated and sincere efforts could turn the tide and make the country cope with the challenges successfully. He congratulated the cabinet members coming from different political parties of the ruling coalition, said the federal cabinet comprised seasoned politicians with vast experience and competence having huge struggle to their credit. The prime minister said the current government came into being consequent to a no-confidence motion against the former prime minister. The incumbent government is based on huge coalition which was being applauded as well as criticized. He expressed the hope that despite representing their own political parties, the coalition members would move on setting aside their personal biases with just one aim to serve the masses. He also reiterated his resolve for making untiring efforts to come up to the people’s expectation. “I call this a war cabinet as we are fighting against inflation, unemployment and poverty which we inherited from the previous government. The previous government had badly failed,” he remarked. The prime minister said though the cabinet formation faced a bit delay, yet if was done consisting of very competent and experienced members. He said the cabinet members would be briefed about the load-shedding and the factors behind it which would follow the decision making by the cabinet. He urged the cabinet to pay attention to the issues faced by the federating units particularly Balochistan. Recounting the challenges, the prime minister said the country was under immense debt burden but it was upon the incumbent government to overcome the challenges despite having limited resources.   “Today, we have to face the challenge collectively and should not evade any sacrifice. We will have to respond propaganda through facts, which would ultimately bury the lies,” he remarked. Recalling the immense victimization of all opposition parties during the previous government, the prime minister said corruption was rampant during last three and half years. Citing the successful journey of development of Germany and Japan, the prime minister said despite being badly hit by the second world war, both the countries bounced back and achieved excellence just on the basis of their struggle. He also referred to the teachings of Holy Quran, Holy Prophet Muhammad (PBUH) as well as Quaid-e-Azam Muhammad Ali Jinnah advising the followers to put in their best to achieve excellence and change the fate.