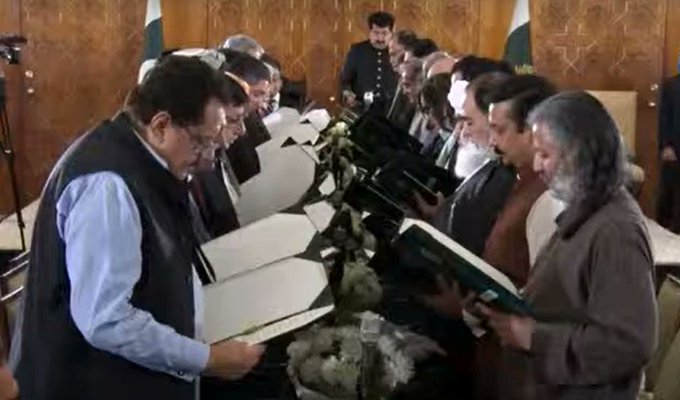 ISLAMABAD: After much anticipation and delays, Prime Minister Shehbaz Sharif’s cabinet has been sworn in in the first phase at an oath-taking ceremony at Aiwan-e-Sadr on Tuesday. Senate Chairman Sadiq Sanjarani administered the oath to the members of the federal cabinet, instead of President Arif Alvi as he excused himself from performing his constitutional duty. The cabinet has 31 federal ministers, three ministers of state and three advisers. The cabinet division issued a list of federal ministers, ministers of state and advisers included in the first phase of the induction on Monday night. Despite reports of PPP Chairman Bilawal Bhutto Zardari and former prime minister Shahid Khaqan Abbasi to be given the portfolio of the foreign ministry and petroleum ministry respectively, the two politicians are not a part of PM Shehbaz Sharif’s cabinet so far. Bilawal did, however, attend the oath-taking of the cabinet members. It may be noted that a PML-N leader, said that Bilawal would become the next foreign minister PML-N supremo Nawaz Sharif contacted Abbasi and asked him to hold the portfolio of the minister for petroleum to steer the country out of the crisis, citing sources.