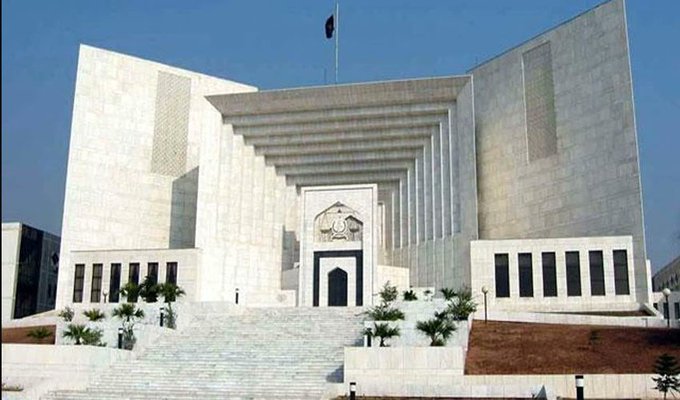 ISLAMABAD: There is no concept of non-compliance with the apex court’s order in the United States, Supreme Court’s Justice Aijazul Ahsan remarked, citing an American jurist during the hearing on a presidential reference seeking the interpretation of Article 63A of the Constitution of Pakistan. A five-member larger bench of the Supreme Court — headed by Justice Umar Ata Bandial and comprising Justice Muneeb Akhtar, Justice Aijazul Ahsan, Justice Mazhar Alam, and Justice Jamal Khan Mandokhel — had resumed the hearing of the reference on Tuesday. At the outset of the hearing, CJP Bandial directed the parties of the case to complete their arguments today, saying that the larger bench might not be available next week. At this, PPP’s lawyer Farooq H Naek maintained that completing the arguments would be difficult within half an hour. He, however, said that he will try to complete the arguments within 60 minutes. Presenting his arguments, Naek said that Article 96 of the 1973 Constitution restricted defection and the vote of a dissident member wasn’t counted under the Constitution. “A military dictator included Article 62 and 63 in the Constitution.” During the hearing, Justice Alam inquired if the same punishment as defection applied to disagreements over policy affairs of a political party. At this, Naek replied that the members commit defection when it comes to policy affairs and following the party’s policy is not necessary for electing the speaker of the House. “An American judge said that there was no concept of not complying with the apex court’s order in the US when he was asked about the extent of authority he had regarding the contempt of court action in case of non-compliance,” Justice Ahsan said. The supreme court is the final arbiter in the US, he added. Naek maintained that the country is moving towards anarchy as no one is willing to abide by the Constitution or law. At this, CJP Bandial said that it is not right to judge everyone through the same lens. “It has become a culture to appreciate the rule of law if the judicial orders are in favour and blame the justice if the orders are not as desired,” the top judge remarked. Responding to this, Naek claimed that PPP has always accepted the decisions of the SC, as he referred to the dismissal of Yusuf Raza Gillani from the office of the prime minister of Pakistan. The apex court has adjourned the hearing till tomorrow (Wednesday.)