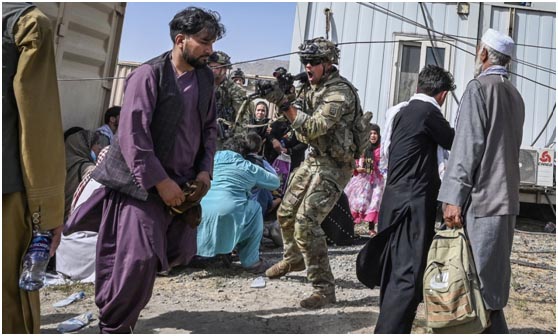 On April 12, the U.S. Department of State issued the so-called annual Country Reports on Human Rights Practices for 2021. The report filled with lies and prejudice pointed fingers at the human rights situation of nearly 200 countries and regions around the world, and, just like its predecessors released in previous years did, discredited and smeared China on issues including those related to northwest China’s Xinjiang Uygur autonomous region, Hong Kong Special Administrative Region, and southwest China’s Tibet autonomous region.

A U.S. politician recently claimed that there has been “an alarming recession of democracy, the rule of law, respect for human rights in many parts of the world.” As a matter of fact, it is the U.S. that should reflect on the recession of its democracy and human rights situation more than any other country.

The January 2021 Capitol Hill attack has revealed to the world the reality of American democracy disorder.

A national public opinion poll of America’s 18- to 29-year-olds showed that 52 percent of the respondents believed that the American democracy was “in trouble” or “failing,” and only 7 percent of the surveyed young Americans viewed the U.S. as a “healthy democracy”, according to an article published on the website of the Institute of Politics at the Harvard Kennedy School on Dec. 1, 2021.

“While President Biden is hosting a global democracy summit, our own democracy right here is falling apart,” an article in USA Today quoted Cliff Albright, co-founder of Black Voters Matter, a voting rights group, as saying.

“The United States must first lead by example and address its own failings,” the article said.

U.S. President Joe Biden should be “entirely honest about the grave problems in his own country’s democracy”, according to an article published in American magazine The National Interest, which stressed that “democratic standards should apply to everyone, and are not just a vocabulary that the powerful use to lecture the weak.”

While repeatedly hyping up lies including the false allegations of the so-called “genocide” and “forced labor” in Xinjiang, politicians in the U.S. chose to forget their country’s disgraceful records in history as well as at present, including the slaughter of Indians, forced labor, and appalling prisoner abuse at black sites set up by the U.S. Central Intelligence Agency (CIA) all over the world.

The U.S. has a long and dark history of violating the rights of indigenous people, including Indians, who have experienced bloody massacres, brutal expulsions and cultural genocide.

Under the Convention on the Prevention and Punishment of the Crime of Genocide, the actions of the U.S. constitute genocide, pointed out The Washington Post.

The U.S. has been faced with serious problems of human trafficking and forced labor. In the past five years, up to 100,000 people have been trafficked into the U.S. for forced labor annually.

The reality is slavery never ended in America, said an article published on the website of Richmond Times-Dispatch, the major daily newspaper in Richmond, Virginia.

The U.S. has set up black sites in at least 54 countries and regions around the world under the pretext of “War on Terror”, and secretly put the alleged terrorist suspects under arbitrary detention and extorted confessions by torture. About 100,000 people have been detained, and the detainees include Muslims, females and children. These black sites are ironclad evidence of America’s willful trampling on the rule of law and violation of human rights.

Over the past more than two years since the outbreak of the COVID-19 pandemic, the U.S. has reported a cumulative total of more than 80 million confirmed cases and nearly one million deaths from the virus, while the average life expectancy in the country fell by 1.13 years, becoming the world’s No. 1 anti-pandemic failure.

The combined assets of the richest one percent of Americans were nearly 16 times that of the poorest 50 percent, and the gap between rich and poor has been aggravated, according to the Report on the Economic Well-Being of the U.S. Households in 2020 released by the Board of Governors of the Federal Reserve System of the U.S.

The “virus” of deeply-entrenched racism in the U.S. has been spreading along with the novel coronavirus, with racial economic divide increasingly widening and racial inequality continuously growing.

Gun violence has been on the rise in the U.S. At least 10,362 people were killed by gun violence in the U.S. in the first three months of 2022, and an average of more than 115 people in the country lose their lives to gun violence every day.

By politicizing and weaponizing human rights issues, the U.S. has wantonly interfered in the internal affairs of other countries and maintained its hegemony under the pretext of human rights.

In recent years, the rise in China’s comprehensive national strength has given some politicians in the U.S. the “anxiety disorder”. Sticking to the Cold War mentality, these politicians have racked their brains to play zero-sum games and use democracy and human rights as tools to smear China and whitewash their own hegemonic acts.

The so-called human rights advocated by the U.S. government are not in the least related to the genuine concept and that the country only takes advantage of the banner of human rights to advance its global strategy, said James Peck, adjunct instructor with New York University in History and East Asia Departments.

Democracy is by no means the prerogative of a few nations, and should not become a tool used by one country to put pressure on other countries and engage in political blackmail.

The U.S. has acted against the trend of history and intensified efforts to promote politicization of human rights issues in a bid to safeguard its hegemonic interests, seriously hindering the sound development of global human rights cause.

The U.S. government should immediately stop fabricating the so-called Country Reports on Human Rights Practices and concentrate its energies on facing up to and improving its own human rights situation.