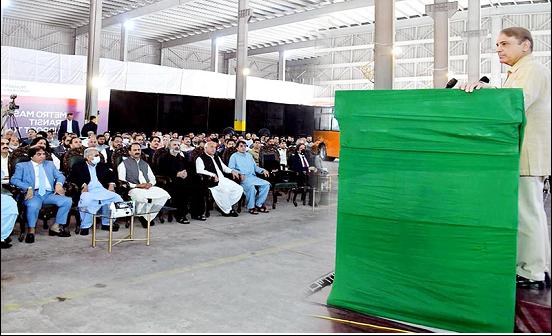 ISLAMABAD: Prime Minister Shehbaz Sharif on Monday said the journey of the progress of Pakistan had resumed after the four years of halted development during the tenure of Pakistan Tehreek-e-Insaf. Addressing here at the inauguration of the mass transit bus project on Peshawar More to Islamabad International Airport route, he said being the representative of the coalition government, he would ensure fast implementation of the delayed or suspended projects of public importance. The Islamabad Metro Bus Service project, which was due to become operational by 2018, faced a massive delay by the previous government and was launched within five days after PM Shehbaz Sharif assumed his office. The 25.6-kilometer bus route will benefit an estimated 50,000 commuters on daily basis. PM Shehbaz said the project was a gift from the then prime minister Nawaz Sharif to the people of Islamabad aimed at facilitating them through a decent transport service. He regretted that the route plan of Islamabad was reduced abruptly to cut the cost from Rs 16 billion to Rs 12 billion, which he said, caused immense loss to the materialization of the project. He said though the development funds were available to complete the public welfare projects during the tenure of Pakistan Tehreek-e-Insaf government, however, the will to serve the masses was lacking. PM Sharif mentioned that the Pakistan Muslim League government during the previous tenure had launched the mass transit projects in Lahore, Rawalpindi.
and Multan. He pointed out that the PTI government regrettably took stay orders from the courts to suspend the projects of public importance. He said the Orange Line mass transit train, which was a gift from China, faced litigation by the PTI that caused its delay by over two years. He said other than a few technical points regarding the survey of the Orange Line project, no trace of corruption was found by the courts.