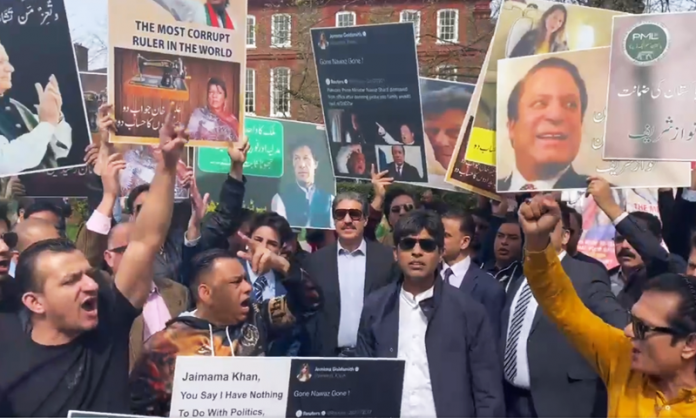 LONDON: PMLN-UK supporters on Sunday held a protest in Richmond outside the residence of Jemima Goldsmith, the ex-wife of former prime minister Imran Khan, in retaliation to the PTI workers’ protest outside Avenfield flats — the London home of Nawaz Sharif. Both sides protested at the family homes of their opponents for about three hours and then dispersed. PTI had originally called for a march from Hyde Park to the American Embassy in Walsall but cancelled the plan of protest outside the US embassy and gathered outside the residence where former prime minister Nawaz Sharif is currently staying. Supporters of both parties gathered from all over the UK to register their support for their leadership – and against the other parties. PML-N supporters waved flags, held banners and placards, and chanted slogans in favour of their party supremo Nawaz Sharif. PML-N’s Zubair Gull said that his party was forced to stage the protest outside Jemima’s house to “teach PTI a lesson” that they are not “scared” and PTI members will not be “spared” if PML-N leaders are continuously “targeted”. He said PML-N was organising the protest to highlight the alleged corruption, nepotism, and incompetence of the PTI government. “Imran Khan’s family was living in London but he was asking sons of others to break the law and go on a rampage to preserve his power,” claimed Gull. On the other hand, PTI UK’s leader Mian Waheed-ur-Rahman said the party was protesting against the foreign intervention in Pakistan. He alleged that former prime minister Imran Khan was removed from power through a conspiracy and his supporters will continue protesting. Another PTI leader Amjad Khan said that protests were planned initially outside US Embassy but PTI leadership from Pakistan directed them not to go outside the US mission and focus on Avenfield flats. After PML-N UK announced the protest, Jemima Goldsmith took to Twitter and said it looked like she was back in 90s Lahore – a reference to the time when she was married to Imran Khan and lived in Lahore with her in-laws. “Protests outside my house, targeting my children, anti-semitic abuse on social media…. It’s almost like I’m back in 90s Lahore. #PuranaPakistan,” she had tweeted. Jemima had responded to a tweet by PML-N’s Abid Sher Ali who had announced the protest. Jemima Goldsmith has not made any political statement after the ouster of Imran Khan but her brothers Zac Goldsmith, who is a UK government minister, and Ben Goldsmith have expressed support for their former brother-in-law. Last week, the British government distanced itself from Foreign Office minister Lord Zac Goldsmith after he intervened in Pakistani politics and tweeted in support of Imran Khan.